Most local governments are getting along with "Occupy" protestors, according to a survey by the International City/County Management Association, but some conflicts continued this week. 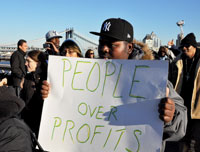 The “vast majority” of local governments have developed successful, collaborative relationships with local “Occupy” movement protestors and have found the protests in their jurisdictions manageable, with relatively few reports of disruption or turmoil, according to a survey from the Washington-based International City/County Management Association (ICMA). However, police clashed with protesters in several cities over the weekend during efforts to evict them from parks in Portland, Ore.; Salt Lake City and elsewhere, according to media reports.

“Most local governments with Occupy movement protests in their jurisdiction have been successful in keeping disruption and public health and safety issues to a minimum, while protecting the protestors’ right to free speech,” ICMA Chief Operating Officer Ron Carlee said in a statement. “This is a testament both to effective city and county governance as well as an indication that the vast majority of protestors are not seeking to disrupt important government functions or quality of life.”   Survey respondents said good communication was the key to maintaining a good relationship with the protestors. To facilitate communication, some managers recommended a single point for all communication and having relevant personnel beyond just law enforcement engaged and aware of issues associated with the protests.
Many respondents recommended meeting early on with protestors to try to work out an agreement that meets their needs as well as those of the local government and community.

City managers responding to the survey also offered tips, such as setting clear expectations, establishing ground rules for protest conduct at the beginning, and avoiding confrontation in dealing with the protests. “I would suggest working with ‘Occupy’ organizers early on to find a visible location that will have little or no impact on others,” Oberlin, Ohio, City Manager Eric Norenberg said in the survey. Merced, Calif., City Manager John Bramble gave similar advice. “We met with the protestors after they appeared in the county park and outlined what would keep them safe and to provide the group a point of contact if they ran into problems,” Bramble said in the survey. “So far, the group has remained very small and has not tried to take an aggressive action.”

However, there have been clashes between authorities and Occupy protesters, with some of the most violent being in Oakland, Calif., where police used tear gas against protesters in October. Those confrontations continued this past weekend, ranging from full-scale eviction of protesters in Portland, Salt Lake City and St. Louis, to individual arrests and simple increased police presence at Occupy encampments, according to the Associated Press (AP).

The Portland Police Bureau said it cleared Occupy protestors from the city’s Chapman and Lownsdale Square parks on Sunday, arresting more than 50 people “who either wanted to be arrested or refused to leave Chapman Square,” according to a Police Bureau press release. The evictions were made with no injuries and no use of pepper spray or less lethal munitions. “[By Sunday morning,] the majority of occupants of both parks had moved out and taken their belongings. Based on this information and that the Parks Bureau was ready to begin cleaning and fencing off the parks, the Portland Police Bureau moved forward in a methodical and thoughtful manner to clear the remaining people from the parks,” the bureau said in the press release.

Salt Lake City police officers began clearing protesters from parks there Saturday after a man was found dead in a tent in the Occupy encampment. The officers arrested 19 people who refused to leave, according to AP. Despite the fact that overnight camping permits will no longer be issued to the Occupy protestors in the city, Salt Lake City Police Chief Chris Burbank and Mayor Ralph Becker said in a statement that the city still hoped to work with the protestors to ensure their right to free speech is not impeded. “The decision to stop issuing camping permits is in no way a call to impede the free speech rights of the Occupy SLC group,” Becker said in the statement. “The Pioneer Park protest site has become a place where some members of our homeless population have settled rather than seek available shelter and needed services. The unfortunate death that occurred Thursday night illustrates the necessity to prohibit overnight camping in the city.”