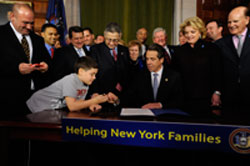 A new law in New York aims to relieve some of the financial burden for parents seeking treatment for their autistic children. On Tuesday, Gov. Andrew Cuomo signed the law, which will require health insurance providers to offer coverage for the diagnosis and treatment of autism spectrum disorder (ASD).

Previously, state law only required that insurance coverage not exclude the diagnosis and treatment of autism disorder. While some health insurers provide limited coverage for ASD treatment, such as vitamins or occupational therapy, most do not offer coverage for treatments that are deemed not medically necessary, according to Cuomo’s office. Out-of-pocket costs for the treatment can be more than $50,000 per year, causing severe economic hardship for some families and leading some to forgo effective early treatment of ASD for their children. “This bill will help thousands of families across New York who struggle to obtain proper care for loved ones affected by autism spectrum disorder,” Cuomo said in a statement. “When it comes to autism, early diagnosis and treatment is essential, and it is inexcusable that financial constraints would stand in the way of a brighter future for those affected by this disorder.”

New York is the 29th state to require health insurance coverage for conditions relating to autism spectrum disorder, according to Cuomo’s office. Similar to other states’ laws, this legislation caps the cost of services per year. Also, the insurance coverage may be subject to deductibles, co-pays, and coinsurance consistent with those imposed on other benefits. The law takes effect on Nov. 1, 2012, and applies to insurance policies issued or renewed after that date.

Autism spectrum disorders are a group of complex, pervasive developmental brain conditions that are often characterized by difficulties in social interaction, impairments in communication, and repetitive patterns of behavior, according to Cuomo’s office. Early detection of ASDs, when followed by the right interventions, can lead to better outcomes in functioning. In New York, approximately 30,000 individuals under age 19 have been identified with ASD, according to Cuomo’s office.