Public works departments begin to use computers to save time and expand the capabilities of engineering staff. 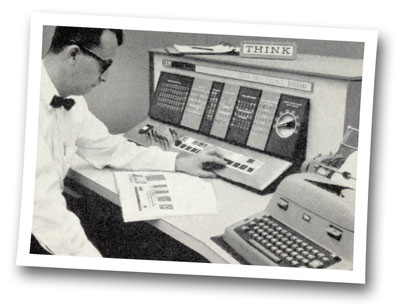 The January 1963 edition of The American City featured news of engineers in the Detroit Public Works Department using a computer to speed calculations and “enlarge the design and operating capabilities of municipal engineering.” In the article, Clyde Palmer, city engineer, and Joseph Fox, engineer of surveys, described the benefits of having the machine in the department, “where engineers can utilize it as readily as slide rules or other tools.”

Before the department had its own computer, engineers would use the city controller’s IBM 650 when it was not being used for accounting tasks. They determined that they really needed their own computer, so the Bureau of Surveys, which had the most experience with computers, was given the job of selection. The bureau installed an IBM 1620 in September 1961 and assigned two men to coordinate its operation with the department’s 11 bureaus, the Public Lighting Commission and the Department of Water Supply. The two-man staff would determine the feasibility of proposed applications and help break down “conventional mathematics into formations for optimum solution by the computer.” They also conducted classes on mathematical approaches to problem solving, and IBM personnel gave courses in computer programming.

To operate the computer, programs were written manually in the computer language Fortran and punched into tape. The computer translated the tape into “machine language, and a basic program object tape is punched.” Staff would store the program in the computer, punch “fixed problem data” into the tape and feed it into the computer. They would enter variable data into the computer using the electric typewriter mounted nearby. After the data was loaded, the computer would make the calculations, which would emerge on the typewriter. “The whole process took only a few minutes compared to the hours it would have taken an engineer to calculate [the problem] by conventional methods,” the authors wrote. “As an aid to engineering integrity, the computer plays a major part in developing optimum solutions to engineering problems. But we also feel that the computer will stimulate engineers to take a more sophisticated approach to problem solving.”