The brightness of LED lighting in beach community's entertainment district changes with the times. 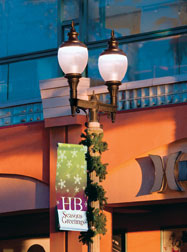 Huntington Beach, Calif. — home to several crowd-drawing events, including Surf City Nights and the U.S. Pro Surfing Open — has installed LED lighting in its downtown entertainment district that can adapt to changing pedestrian and traffic conditions. The new LED lighting fixtures use less energy than the city’s previous fixtures, and their output can be adjusted to suit downtown activities.

By the end of 2010, Sternberg Lighting had installed 42 96-watt LED fixtures in a warm color temperature on Huntington Beach’s main street. The new lights replaced 150 high-pressure sodium prismatic acorn fixtures that were drawing 188 total system watts per light. At full power, the new lights use 50 percent less energy than the previous fixtures.

The new fixtures are connected to a wireless controller system that lets city hall staff increase light levels when needed and reduce them to save costs when less light is required. The city generally keeps the standard light level at 70 percent lumen output and increases it up to 100 percent after 12:30 a.m. on the weekends. During the week, it decreases output to approximately 40 percent from 4 a.m. to 7 a.m. The police department also can adjust light levels in the event of an emergency.

The new fixtures create a well-lit environment during peak shopping and dining hours, and less lighting when the streets are empty. “We looked to LED lighting to improve the quality of light in these high-traffic areas, yet the reduction in maintenance costs coupled with longer service life and potential for field controllable dimming are benefits that can’t be ignored,” says Aaron Klemm, Huntington Beach energy project manager.