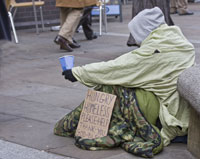 Thirty-two states experienced an increase in the number and percentage of people in poverty during the year, and that was the second consecutive annual increase for 20 states, according to the 2010 ACS. At the same time, no state had a statistically significant decline in either the number of people in poverty or the poverty rate between 2009 and 2010.

The report analyzes poverty rates for large metropolitan areas with populations of 500,000 or more in 2010, which accounts for more than 80 percent of the U.S. population. The poverty rates among those metropolitan areas varied widely, with the lowest being 8.4 percent in the Washington-Arlington, Va.-Alexandria, W.Va., metro area, followed by Honolulu, (9.1 percent); Poughkeepsie-Newburgh- Middletown, N.Y. (9.4 percent); and Bridgeport-Stamford-Norwalk, Conn. (9.4 percent). The McAllen-Edinburg-Mission, Texas, area had the highest poverty rate (33.4 percent) of all large metropolitan areas, followed by Fresno, Calif., with 26.8 percent and El Paso, Texas, with 24.3 percent.