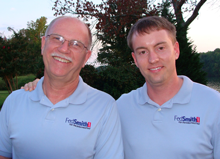 Ralph and Ian Smith of the FedSmith.com federal workplace portal follow technology trends among federal government agencies. Below, they offer their views to Govpro.com about the federal government’s use of social media, phones and other technology. In Part 1, Ian Smith spoke of the “targeting” of government workers because of the budget problems that Congress and federal agencies are facing today. In Part 2, the Smiths discuss the need for technology upgrades to help government employees become more productive.

Ralph Smith: There seems to be a discrepancy among federal agencies as to how to approach social media applications. We used to run conferences, and one of our speakers said that when telephones were first introduced, that government agencies had the same problem — they really didn’t know how to handle this new technology. The federal General Services Administration (GSA) at the time had issued regulations having all these restrictions on phones, and if you wanted to use a telephone, you’d need to get the permission of a supervisor, and then you could make your phone call. And gradually it expanded to the point where all supervisors had telephones, and now, obviously, we don’t think anything about it.

And to some extent, large organizations approach computers the same way. They are fearful how new technology is going to affect their operations. Some of the fears are justified, because of hacking and other mischief. At FedSmith, we’ve run into this issue, and we’ve set up an interactive comments section, and some agencies have actively banned the comment section because it’s considered a social media activity.

So, there’s this lag in acceptance and maybe in adapting to a new technology. Of course, some of the federal security agencies, you would expect them to be more conservative in how their information gets out to the public.

Govpro: How does FedSmith keep fresh and up to date?

Ralph Smith: We’ve gradually expanded our computer capability and have given FedSmith visitors more access to site features. Ian Smith, who is responsible for FedSmith’s design and programming, and keeps the site running smoothly, works to keep the FedSmith site up to date. We’ve also enabled FedSmith visitors to communicate with us using social media. I guess that would be a great topic for an article: “How does the government use social media?”

Govpro: At Government Product News, we are interested in knowing what sites government administrators and staffers are using if they want information on new technology and new products in government. Do any sites come to mind that you’d recommend?

Ralph Smith: One site worth checking is called Nextgov — they have info on technology and how it affects the government — where the government may be leading or behind, depending on the perspective of the author and the issue. So, we tend to use those kinds of sites a lot for technology issues. Another site that is useful is Federal Computer Week. It has some information regarding technology that’s coming out, and the staffers on that site sometimes have a perspective we don’t have. I’d like to think that FedSmith has been in the forefront on a lot of the technology issues through our web site and our newsletter that goes out each day.

Part 4 of this interview will appear soon on Govpro.com.