Where’s a fig leaf when you need one? 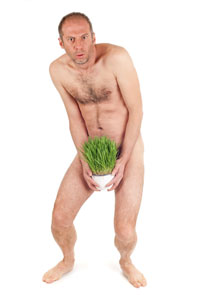 The nudist community in San Francisco does not feel a need to cover their butts, and some are not pleased with a proposed city requirement for them to do so. City Supervisor Scott Wiener’s proposal would require nudists — who are generally tolerated on public streets, particularly in the Castro District neighborhood — to cover up in restaurants and put down a cloth when they sit on public seats.

During a “nude-in” on Sept. 24, organized as part of the unofficial celebrations leading up to the annual Folsom Street Fair, billed as the world’s largest leather and fetish event, a group of au natural protesters expressed their opinions about the proposal, according to the Associated Press (AP). Several dozen men and at least one woman took part in a naked protest, some carrying signs saying, “Nudity is Not a Crime” and “Get Your Hate Off My Body,” according to AP.

The protesters say elements of Wiener’s proposal aren’t necessary. For instance, putting down a towel is already etiquette among nudists, said George Davis, 65, who wore a black fanny pack, a fake lei and sandals at the nude-in. “As nudists, why do we have to go to a special beach or a special resort?” Davis asked. “Why can’t we just go to a park, which we’re doing today?”

Mitch Hightower, the organizer of the so-called “nude-in,” said it was not intended as a protest against the proposal, but was to promote acceptance of the human body no matter what shape or form it comes in. “The people out here believe there is nothing indecent or offensive about the human body,” he said.

Passersby mostly seemed amused by the demonstration, according to AP. But Oakland resident Heather Flynn, who was heading to a nearby screening of “The Little Mermaid” with her 7-year-old daughter, was none too pleased. “When you’re at the corner of a kid’s event, I think you should cover up a little,” Flynn, 27, said. Her daughter, Blanca, also was unimpressed. She scrunched up her face and said the nudists should definitely put some clothes on.

In his September newsletter, under the entry “Ah, nudity,” Wiener says he is surprised by the interest shown to this story. “You never quite know when a minor piece of legislation is going to go viral,” Wiener wrote. “After spending so much of my time working on key issues like Muni, housing, emergency preparedness, taxis, etc., the media decided to obsess on a very minor piece of legislation that I offered.” Wiener goes on to say his proposal was simply “a common sense, sanitary legislation,” not an attempt to ban nudity in the city.