Jesus is my lawyer

An Alabama town is allowing people charged with non-violent crimes to avoid jail if they put a little more religion in their lives. 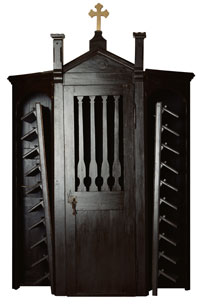 There have been many cases in which convicted prisoners “find Jesus” while behind bars. But one Alabama town is now allowing people charged with non-violent crimes to avoid jail altogether if they put a little more religion in their lives.

Starting in the last week of September, local judges in Bay Minette, Ala., will give those found guilty of misdemeanors the choice of serving out their time in jail, paying a fine or attending church each Sunday for a year under a new program called Operation Restore Our Community (ROC), according to CNN.com. Those who choose to go to church will have to check in with a pastor and the police department each week. After a year of regular church-going, the ROC participants’ cases will be dismissed.

Bay Minette Police Chief Mike Rowland said the measure would save money and help direct people down the right path. Rowland said it costs $75 a day to house each inmate, and 30-day drug programs don’t have the long-term capabilities to heal someone in the ways the ROC program might.

However, the ACLU in Alabama said the idea is “blatantly unconstitutional,” according to the Mobile Press-Register. “It violates one basic tenet of the Constitution, namely that government can’t force participation in religious activity,” Olivia Turner, executive director for the ACLU of Alabama told the paper. Rowland said separation of church and state issues should not be too big of a problem because offenders weren’t being forced to attend church; they were just being given the option. Also, the offenders who voluntarily choose church over jail get to pick the churches they attend, although there are no synagogues or mosques in the area, according to CNN.com.