THE BOSS Snowplow organization is underwriting a second year of Project EverGreen’s SnowCare for Troops program and urging snow removal professionals to join the movement and double the volunteer base in year two. 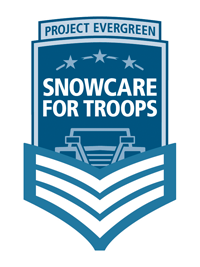 THE BOSS Snowplow organization, based in Iron Mountain, Mich., is underwriting a second year of Project EverGreen’s SnowCare for Troops program and urging snow removal professionals to join the movement and double the volunteer base in year two.

SnowCare for Troops provides free snow removal services for military families with a spouse or family member serving in the armed forces through a volunteer network. Snow removal professionals and other volunteers support the program in several ways, including:

“The response to SnowCare for Troops from caring professionals and military families has been tremendous, and we are challenging our supporters to double the participation for the 2011-12 snow season,” said Mark Klossner, marketing manager for THE BOSS Snowplow. “We want to thank everyone who gave countless hours in heavy snow, sleet and ice to back up our country’s selfless military families this past winter. As the brand that backs up snow removal professionals, we’re asking for their help to spread the word and expand participation this year. We know they’ll get back tenfold what they put into it.”

The program is open to anyone with a plow or other snow removal equipment who wants to lend a hand. Through its active backing and participation, BOSS provides funding and helps build awareness for SnowCare for Troops to encourage grassroots involvement.

“SnowCare for Troops got off to a roaring start, and we want to thank BOSS Snowplow for backing up military families once again through its integral support,” said Project EverGreen Executive Director Cindy Code. “When a loved one is serving overseas in the armed forces, having the added burden of snow removal lifted from the shoulders of the one left behind is a priceless gift.”