Nothing worse than cocky neighbors

New York's Lower East Side is quiet again now that a pair of noisy roosters have been evicted. 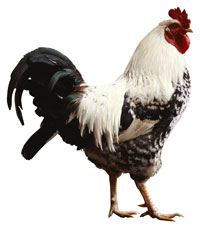 New York’s Lower East Side is quiet again, with the exception of sirens, traffic and other city sounds. But all that is apparently fine with some residents, so long as Napoleon and Caesar are out of the neighborhood.

Napoleon and Caesar are a pair of roosters who had lived for the past few months near a community garden on Rivington Street, according to the New York Post. The two birds, as roosters are wont to do, had a habit of crowing. Loudly. In the early morning and any other time. “Since I moved in, I hear it all the time,” Frances Koepenick, who lives near the M’Finda Kalunga Garden, told the Post. “It sounds like you’re on a farm. I get up around the time he starts crowing. If I didn’t get up then, I’d probably go crazy.”

Another neighbor, whose name was not given, had a suggestion: “They should move them out of here. Roosters are not meant for city life.” So, on Monday, volunteers at M’Finda Kalunga Garden decided to move the feathered ersatz dictators to an upstate animal farm. Napoleon and Caesar didn’t seem to put up much of a fuss about the move, according to the Post. “They’re actually very loving and friendly,” a garden volunteer, told the newspaper.