B. Jones, a photographer with the Newark, N.J., media office, took this photo of the city's participation in the national "Stop and Remember" commemoration of the 10-year anniversary of the Sept. 11 terrorist attacks in New York, Washington and Pennsylvania. 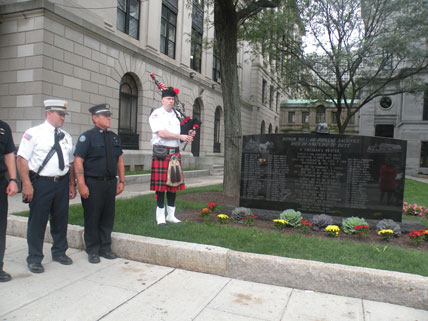 B. Jones, a photographer with the Newark, N.J., media office, took this photo of the city’s participation in the national “Stop and Remember” commemoration of the 10-year anniversary of the Sept. 11 terrorist attacks in New York, Washington and Pennsylvania. Instead of the traditional moment of silence at the time of the attacks, participants in the new national event, such as Newark, had all sirens and church bells ring for one full minute in observance of a “National Moment of Remembrance.” Newark lost five residents in the attacks: the Rev. Sean Booker, Elizabeth Ann Darling, Daphne Elder, Syed Abdul Fatha and Harry Ramos. In the photo, Newark Fire Department bagpiper Tom Shea plays “Amazing Grace” during a ceremony at the city’s Firefighters’ Memorial near City Hall. At left is Battalion Chief Kevin Flanagan.