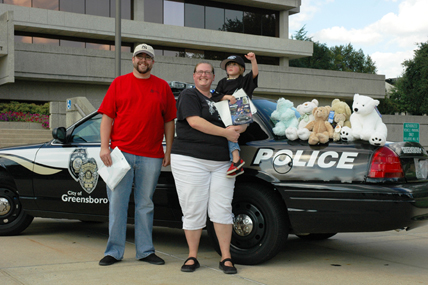 Susan Danielsen, public information officer for Greensboro, N.C., took this photo of four-year-old Niko Veneris and his parents, Linda and Chris Veneris, donating Niko’s birthday presents to the Greensboro Police Department’s Officer Ted E. Bear program. Since he was two years old, Niko has asked friends and family to donate gifts to an organization of his choice instead of giving him birthday presents. This year, chose the as the Officer Ted E. Bear program as the benefactor because police are his “super heroes.” He delivered about 20 stuffed animals to police headquarters for the program, which accepts donations of stuffed animls for police officers to give to children to soothe them in times of stress.