When Bart Johnson started his law-enforcement career 32 years ago working with the New York State Police, the focus was on catching local criminals rather than following regional or statewide criminal patterns. After 9/11, Johnson, who is principle deputy undersecretary of the Department of Homeland Security’s Office of Intelligence and Analysis (I&A), says that law enforcement agencies across the country started developing regional intelligence, investigation and mitigation programs through fusion centers — facilities that serve as focal points for sharing criminal and terrorist data across multiple jurisdictions, improving government security. 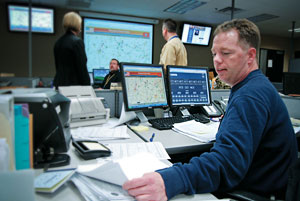 Fusion centers are regional and, therefore, efficient, and deliver local governments a government security service they could not afford individually, Johnson says. Indeed, fusion centers’ greatest efficiency is the ability for law-enforcement and other city agencies to keep abreast of possible suspects entering the area. “With better intelligence, you can focus your resources where they are needed most,” he says.

Johnson emphasizes that even in the current economic climate, officials should still support the national network of fusion centers because they are part of the homeland security fabric. “Officials need to be engaged in fusion centers and ensure they are funded,” he says. “Individuals are plotting in our communities to carry out terrorist attacks. So [officials] must support information sharing and these centers.”

Fusion centers also create information-sharing efficiencies that were non-existent before 9/11, says William Bratton, who has been a fusion center advocate since the 1990s when he served as New York City’s police commissioner. At that time, his department had a system that was intended to ensure that detective, patrol and organized crime sections could share information routinely. But after 9/11, local and state police needed a way to efficiently share terrorist-related information with their federal counterparts, he says. “It was after 9/11 that the idea started to surface in different communities around the country to create fusion centers,” Bratton says.

NYPD’s fusion center model was repeated in Los Angeles when Bratton accepted the chief of police position in 2002. The city created one of the nation’s first official true fusion facilities, dubbed the Joint Area Regional Intelligence Center. It was located inside FBI facilities and was funded significantly by the FBI, Homeland Security, Los Angeles County and the city’s police department. Bratton says it was staffed by all four agencies.

The initial effort focused on terrorism, but participating agencies quickly adopted an all-crimes approach. Bratton says they broadened the fusion center’s scope to identify local criminal patterns and trends to help identify terrorist threats. “Sometimes, terrorists and terrorist activity can be detected by a traditional police investigation … in pursuit of more traditional crimes,” Bratton says. “Often, those crimes are in the first steps of putting together a terrorist act.”

An all-hazards approach not only protects local residents, but also helps pinpoint homegrown, domestic terrorists who may be swayed by jihadist propaganda. It is important that city leaders recognize that the threat is both domestic and international, and that fusion centers should be funded, Bratton says.

After 9/11, fusion centers were an easy sell, Bratton says. But 10 years later, with few incidents occurring and the current recession, fusion centers “are under great stress because local government leaders are unsure if they can fund them,” he says.

Part of the problem is buy-in. Because the prevention work is done covertly and behind the scenes, fusion centers must fight to make a public case about why they are necessary pieces of the national government security organization. “It’s now more difficult to show their importance because we haven’t had a significant terrorist event in the U.S. since 9/11 … even though many have been detected by local police and community efforts, as well as the efforts of fusion centers,” Bratton says.

Government officials can measure efficiencies in the operation of fusion centers to justify their existence, Bratton says. One of the greatest efficiencies is how such centers support the cross-training of first-responders and civilian employees. That means personnel can work across law-enforcement lines, he says.

Fusion centers also use technology and information sharing to increase the effectiveness of all policing, Bratton says. Federal, state and local police officials and homeland security officials share a physical location resulting in improved collaboration, which multiplies the benefit beyond each of the agencies because they can quickly share comprehensive information. They then can pinpoint their efforts in specific criminal areas, Bratton says. “In other words, everybody’s looking at the same information at the same time, rather than having four separate silos like in the past,” he says. “Now, everyone is operating on common ground and common platforms.”

Most important, fusion centers stave off terrorism, and that is the No. 1 reason city and county leaders should support them, Bratton says. “This is one of those advancements that needs to be incorporated into the investment into police and public safety, with the understanding that fusion centers help deal with terrorists,” he says. “But also … they can track traditional crime occurring, which allows police to respond more quickly to identify patterns and trends effectively.”

Most fusion centers take an all-crimes approach through a partnership with federal agencies focused on government security. For example, the Tennessee Fusion Center is a partnership between the state Office of Homeland Security and the Tennessee Bureau of Investigation with access to data from more than 500 law-enforcement agencies within the state, says Rick Shipkowski, deputy homeland security advisor for the Tennessee Office of Homeland Security. Like other fusion centers, it consolidates information, looks for trends and distributes findings to state and local law-enforcement agencies, Shipkowski says.

“An all-crimes approach helps combat terrorism because the root of their funding is criminal enterprises, such as illegal smuggling of arms and drugs,” he says. “We are able to look at criminal operations that can provide material support to combat terrorism and report suspicious activities directly tied to terrorism.”

Criminals and terrorists do not pay attention to jurisdictional boundaries, Shipkowski says. Often, their footprints can cross jurisdictions, and sharing data means local and state police can investigate incidents and solve crimes more seamlessly. “Where it helps a city manager or mayor is it gives their law-enforcement agencies unprecedented access to information to help keep their community safer,” Shipkowski says.

In addition, it technically costs cities and counties nothing. The Tennessee center, for example, is funded by U.S. Department of Homeland Security grants and state funds. “There’s little cost to running a fusion center annually, and the return on the investment enhances public safety,” he says.

Indeed, a fusion center provides public-safety officials with unprecedented amounts of information. At the same time, center operators go to great pains to ensure individual rights and privacy are protected, which is a concern of citizens, Shipkowski says. It is important city and county leaders should help change the public reputation of such government security centers as “Big Brother,” he says. Instead, they should ensure the constituents know that the fusion centers “consist of dedicated people consolidating information to enhance the safety of citizens.”

While fusion centers’ financial footing may be at stake because of the economy, Bratton says they should be funded because of the efficiencies created by combining intelligence across agencies. “We have developed over the last 10 years significant means to reduce the potential for a terrorist attack as well as to improve our crime-fighting and deduction capabilities through fusion centers,” he says. “The benefits far outweigh any costs.”

The following capabilities outline the standards necessary to perform the steps of the intelligence process within a fusion center: