Arrest me, I insist! 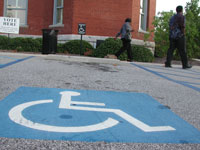 Shelton police say on Aug. 25 Michael Andes was so upset about the lack of parking enforcement in his town that he parked his car illegally in a handicapped space and called police more than a dozen times, starting at 2 a.m., according to the Associated Press (AP). Authorities say Andes yelled at a dispatcher during the first phone call. When the officers arrived, Andes became combative and screamed at officers that they were not doing their job.

In response, the officers subdued Andes with a stun gun and arrested him. He was charged with breach of peace, interfering with an officer and was given a parking ticket, according to AP. Andes posted $1,000 bail and is due in court Sept. 6.