Most Americans are unhappy with the condition of the roads in their communities, according to a new America THINKS survey from HNTB Corp.

Most Americans are unhappy with the condition of the roads in their communities, according to a new America THINKS survey from Kansas City, Mo.-based HNTB Corp. The survey says most Americans are looking for decisions from local and regional officials about how to prioritize fixing those congested, crumbling roads, and most would prefer paying tolls over taxes.

Fifty-four percent of Americans have a problem with the poor road conditions, and 50 percent say the nation’s byways are too jammed, according to the survey, released Aug. 9. More than seven in 10 (72 percent) feel that interstate highway funding decisions should be made at the local or state level, while 27 percent think that should be a federal responsibility. Most believe transportation departments — including state departments of transportation (28 percent), local and regional transportation authorities (28 percent) and the U.S. Department of Transportation (24 percent) — should be the primary decision makers for addressing the needs of interstate highways, not elected officials. “It’s clear Americans want to take the politics out of transportation prioritization and funding,” said Pete Rahn, leader of HNTB’s national transportation practice, in a statement. “It’s time for our elected officials to do the same so our critical interstate highway system remains a valuable, viable asset.”

Previous America THINKS research has shown many Americans prefer tolling over increased gas taxes. The latest survey found that 66 percent also would like their toll money to go toward solving the wear-and-tear and congestion issues that cause so many problems with highways. Forty-one percent of those surveyed would be willing to chip in for repairing or rebuilding worn-out roads and bridges, 30 percent would prefer their tolls went to developing dedicated truck lanes, and 24 percent prefer adding lanes to existing roads.

At the same time, 82 percent of Americans think the average toll rate for every 10 miles on an interstate highway should be a dollar or less, according to the survey, and 56 percent think the average toll rate for every 10 miles should be 50 cents or less. Fifty-four percent would prefer taxes and highway toll money went to long-term interstate highway upgrades, such as creating truck-only lanes or high-occupancy lanes than short-term highway maintenance projects. “A variety of different funding strategies, such as tolling, will be needed as inflation, aging infrastructure, increased construction costs, alternative fuels and improved fuel economy vehicles continue to eat away at the purchasing power of the federal gas tax,” Rahn said. 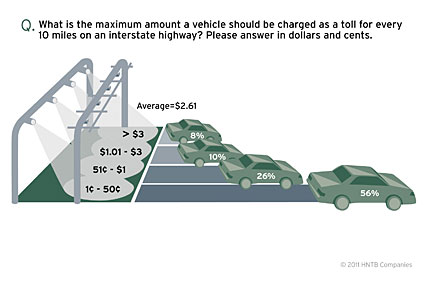