New York City is about to exercise its buying power muscle by totally revamping its procurement process. That is a key part of this local government effort to consolidate and modernize its back-office operations with a goal of saving $500 million over the next four years. Initiated by Mayor Michael Bloomberg and Deputy Mayor Stephen Goldsmith, the effort focuses on the Department of Citywide Administrative Services (DCAS), led by Commissioner Edna Wells Handy. 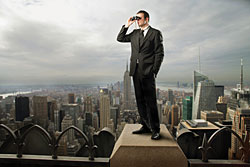 “We’re looking at all of the areas where we could produce a higher quality government for less cost, and none is more relevant, particularly in the short term, than procurement,” Goldsmith says. “In a period when demand for services exceeds the dollars available, we have an obligation to wring every dollar out of our procurement practice while enhancing the quality of what we’re procuring.”

To tackle a problem as complex as reforming purchasing for all of New York City, Bloomberg and Goldsmith recognized the need to bring in someone with a fresh perspective to take on the city’s many entrenched interests. In January, they named Sergio Paneque, Michigan’s former chief procurement officer, as head of the DCAS’ Division of Municipal Supply Services. “Sergio had a terrific reputation as having brought procurement reform to Michigan, a government with a similarly complicated bureaucracy and a portfolio of contracts as large as ours,” Goldsmith says. “I liked what he did with Lean Six Sigma and thought we could do it here.”

Paneque’s mandate is clear: Drive savings. “Coming from Michigan, where we’ve had deficits for years, we were always focused on savings,” he says. “Here in New York, with a budget cut projected to be upwards of $3 billion, we need to always be focused on how we can reduce cost.”

Paneque’s challenges are as clear as his mission. Agency chief contracting officers — an influential group of procurement professionals that manage purchasing activities for powerful departments like police, sanitation and fire — had complained for years that DCAS lacked customer service and did not add value to their operations. They argued that city contracting takes too long. While the pendulum between control and efficiency typically swings back and forth several times in a decade, in New York it has been stuck firmly on the side of oversight and control. A series of procurement scandals in the 1980s produced a culture of creating ever more onerous oversight requirements that has increased costs and decreased service levels.

For example, a contract might require the approval of up to seven different entities: the agency’s attorney, the city’s legal office, the Office of Management and Budget, the Mayor’s Office of Contract Services, the Bureau of Labor Services, the Department of Investigation, and the Comptroller. And, in most cases, one approver reviews a contract only after the previous approver has signed off. “All of these approvals easily add five months to the process,” Paneque says.

In response to the challenges, Paneque quickly settled on a strategy of reducing procurement cycle times, improving customer service and using strategic sourcing to leverage New York’s spending. To reduce a typical procurement cycle, which can last up to 14 months, Paneque launched a Lean Six Sigma (LSS) initiative. LSS focuses on every step in a process and eliminates those that add no value. Already DCAS staff have found ways to reduce cycle times by roughly 25 percent, and Paneque is optimistic even greater savings will be realized.

Through LSS, DCAS staff has been given a new power. “Lean Six Sigma puts the employees in control,” Paneque says. “I said to the team, ‘You identify the things we need to fix, and suggest ways to do it. I’ll only step in if the change won’t save money or if it would create a legal or audit issue.’ When the team recognized they owned the process, they supported it.”

The changes are resonating with DCAS’ purchasing professionals. “By introducing LSS, he’s transformed a disempowered and disheartened staff into one that’s driving the change to greater efficiencies,” says Robert Cleary, assistant commissioner for procurement. “The emphasis on finding savings through procurement has completely changed the way we look at sourcing and managing our contracts.”

Getting to know the customer

The second strategic initiative was to raise customer satisfaction among DCAS’ agencies. To address the apparent detachment between DCAS and the agencies, Paneque assigned members of his team as liaisons to the agencies, building bridges of communication and goodwill. “I told our team to get to know your customer,” he says. “Get to know their mission. Figure out how we will proactively source for the missions they have.”

He pointed to the procurement of garbage collection trucks as an example. “Sanitation has to be concerned about size of the cabs. They have to be concerned about how many times their people are getting on and off the truck,” Paneque says. “If the back [of the truck] is two inches higher, it would put additional stress on the body of the worker and reduce their effective career. Only if you are really engaged with your customer will you understand that and have appreciation for it.”

While it will take time to completely change the opinions of their customers in the agencies, at less than a half year into his tenure at DCAS, Paneque is winning supporters within the city’s contracting community. “I find DCAS nowadays to be significantly more user-friendly,” says Ron Blenderman, assistant commission and agency chief contracting officer for the Department of Sanitation. “Their buyers are working directly with their customers — the people that put the trucks on the streets. They are listening to our employees’ needs, right down to the lowest level. It is a sea change at DCAS.”

The third initiative is to introduce strategic sourcing where procurements are structured and managed to maximize cost-effectiveness and customer service levels. New York’s expenditures on goods and services are immense, larger than nearly every state and many Fortune 500 companies. In procurement, pricing is largely a function of volume. So, the city’s efforts to better leverage its buying power could save tens of millions of dollars annually.

Paneque was astonished at the number of contracts the city manages. “We have far too many contracts that fragment our buying power, forcing us to pay too much. It is also taking up too much of our staff time to manage all these contracts. Realistically, we should only have 300 to 400 contracts,” Paneque says. One of DCAS’ initiatives is to find opportunities to bundle similar contracts together and to use the increased volume to negotiate lower prices with suppliers.

Rather than add more staff to handle the significant demands of the new mission, Paneque went through his organizational chart, hunting for positions that were not critical to the department’s mission but that could be converted to ones that were — particularly buyers. At its peak, DCAS had 70 buyers. When Paneque arrived at DCAS, the buying ranks had shrunk to 15. “Buying is our core mission, but so few of our resources were allocated to it,” Paneque says. “We had people doing all kinds of outdated activities, like managing a bid room, managing a file room, mailing out bids. We found more efficient ways of performing these tasks so we could turn some of those people into buyers.”

Once he created the positions, he had an unexpected problem — convincing people to take them. “Buying positions were not sought-after. Previously, our buyers got blamed for everything. Every time a contract expired and we didn’t have a new contract, they got blamed,” Paneque says.

He renamed the organization from the Office of Municipal Supply Services to the Office of Citywide Purchasing to show that the focus is on buying. “Our team understood that the opportunities for career advancement would be in the buying units. Even more important, I told them that I would have their backs and that they wouldn’t be hung out to dry again,” Paneque says.

DCAS’ new strategic sourcing initiatives include analyzing the city’s purchasing to maximize negotiating leverage, finding opportunities to bundle similar contracts, increasing use of cooperative purchasing, and employing total cost-of-ownership to find more effective solutions to the city’s sourcing needs. Using more requests for proposals (RFPs) is equally important. “As we become a more mature organization, we will be conducting more and more procurements through RFPs,” Paneque says. “In a low-bid contract, you are telling the marketplace exactly what you want even if it’s not the best solution out there. An RFP allows the marketplace to develop a solution that best fits your needs. It also allows us to conduct meaningful negotiations with multiple suppliers to wring out additional savings.”

As Michigan’s chief procurement officer, Paneque used cooperative purchasing agreements, in which a government uses a contract that has been competitively procured by another jurisdiction. It is a best practice, endorsed by the American Bar Association and every major public procurement association, such as the National Institute of Government Purchasing (NIGP) and the National Association of State Procurement Officers.

Critical to all of the city’s reforms is introducing modern procurement technology. “The technology we have is 30 years old,” Paneque says. “We have disparate systems that don’t talk to each other.”

Already, though, the city’s effort to re-engineer business processes to attain savings is paying off, Handy says. “We first modeled LSS with Sergio’s procurement group. We are rolling that effort throughout the organization to show the efficacy of collaboration between and among all those touching a given process,” she says. “The results are anticipated savings of hundreds of thousands of dollars; and just as important, establishing cross-disciplinary groups as the preferred means of attaining efficiencies, increasing productivity and cutting time and costs.”

Fixing New York’s procurement system won’t be easy or fast, but as Bloomberg notes, those savings can improve the quality of services. “Our work is not just about saving money; it’s about making government more effective.”