Libraries continue to increase the amount of technology-related services they provide, but cuts to local and state government budgets have made libraries harder to use, according to a report released Tuesday by the American Library Association. 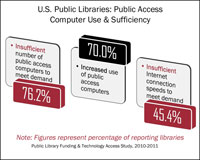 Libraries continue to increase the amount of technology-related services they provide, but cuts to local and state government budgets have made libraries harder to use, according to a report released Tuesday by the Chicago-based American Library Association (ALA). Internet access, software and training for job-seekers continues to be one of the most popular technology services libraries provide, according to ALA’s 2011 Public Library Funding & Technology Access Study, but a loss of funding has led to fewer staff and shorter hours.

And, while more than 74 percent of libraries offer software and other resources to help patrons create resumes and employment materials, often with help from library staff, 56 percent of libraries report they do not have enough staff to effectively assist job-seekers. “Since the recession began, libraries have grappled with budget cuts and decreased hours, while users wait in lines before doors open, eager to use library computers or access Wi-Fi, get expert assistance for job search, and learn how to download e-books,” said ALA President Roberta Stevens in a statement. “We want patrons — and policymakers — to understand the dynamic resources available at today’s library and keep those resources funded. Let’s make sure that our investment in libraries yields its full potential.”