The recession continues to strain city budgets, but there are signs that business and economic activity are improving, according to a new survey from the National League of Cities. 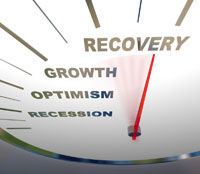 The recession continues to strain city budgets, but there are signs that business and economic activity are improving, according to a new survey from the Washington-based National League of Cities (NLC). Some respondents to NLC’s Local Economic Conditions survey, released June 6, said they have seen improvement in the retail sector, as well as business permits and licenses.

Forty-five percent of survey respondents report that the health of the retail sector is improving, and 28 percent report that business permits and licenses are improving. Additionally, more than one in three officials (35 percent) report increased investments in new infrastructure and capital projects during the past six months.

However, not all the news was good. More than one in two (51 percent) officials report that residential property values have worsened over the past six months, 44 percent report that commercial property values have worsened, and 41 percent report that the demand for survival services, including food banks and shelters, has increased. Areas most in need of investment to help generate economic growth, according to respondents, are small business development (54 percent), transportation infrastructure (49 percent), education/workforce training (31 percent), and housing and neighborhood development (25 percent).

The Local Economic Conditions survey is the first in a new series from NLC’s Center for Research and Innovation. The purpose of the survey series is to provide a parallel track to NLC’s 25-year survey on City Fiscal Conditions. “Our work on city fiscal conditions has shown over the years that there is, approximately, a two-year lag between economic shifts and impacts on local revenues,” says Chris Hoene, the center’s director. “We hope this new survey series will help us better report on and predict changing economic and fiscal circumstances in cities.” The next iteration of the survey is planned for late summer.

Read more about the NLC survey.