Imagine a 15,000-pound truck slamming into a fence at 50 miles per hour (mph) — and not penetrating the fence more than 3 feet. Ameristar Fence Products’ Stalwart anti-ram barrier system recently survived a test of that severity and has met the requirements of the F2656 standard from ASTM International. 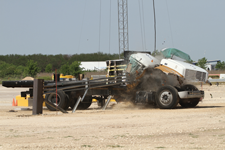 Imagine a 15,000-pound truck slamming into a fence at 50 miles per hour (mph) — and not penetrating the fence more than 3 feet. Ameristar Fence Products’ Stalwart anti-ram barrier system recently survived a test of that severity and has met the requirements of the F2656 standard from the West Conshohocken, Pa.-based ASTM International. The product carries an anti-ram barrier rating of M50/P1 (K12), which specifies the depth of penetration (up to 3 feet).

“The whole idea behind the Stalwart barriers is, how can we keep terrorism vehicle threats at bay,” says Benjamin Shirley, marketing manager at Tulsa, Okla.-based Ameristar.

According to Shirley, government buildings such as federal courthouses often are close to the street with limited space separating them from would-be terrorists. “Governments still have to protect and safeguard the buildings, because today, terrorists can get up to 50 mph traveling down the street.” The Stalwart barrier system, with its ASTM certification, is suited for government facilities that are not surrounded by a lot of grounds or lawns, Shirley says.

Ameristar is constantly testing its security barriers, Shirley says. “What we are doing is designing systems that can really be site-specific,” he says. Results from vulnerability studies, which analyze potential threats at specific facilities and locations, are incorporated in the testing process, he adds.

The Stalwart anti-ram barrier can be integrated into any Ameristar fence system, including ornamental, post and rail units, Shirley says. “One of the key elements behind our system is that the barrier we designed can have an ornamental façade, or a high-security palisade façade. It can be a utilitarian look with welded wire or expanded metal.”

The Stalwart standalone design, when installed adjacent to an existing perimeter fence, transforms the perimeter into a secure anti-crash perimeter system, Shirley says.