Jasper and Newton counties in Missouri, which include the city of Joplin, have been declared federal disaster zones following a powerful tornado that tore through the area on Sunday night. 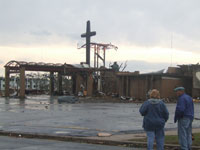 Jasper and Newton counties in Missouri, which include the city of Joplin, have been declared federal disaster zones following a powerful tornado that tore through the area on Sunday night. The storm killed more than 100 people a little less than one month after similarly powerful storms ravaged Alabama and other parts of the South.

A “significant tornado tore through the middle section of Joplin around 6 p.m. Sunday, according to the city’s website. “Many homes and businesses have been affected, and Joplin Mayor Mike Woolston has declared a local disaster due to the damage of this storm,” the website announced. The tornado crushed homes and businesses, and severely damaged at least one hospital, according to media reports.

On Monday, Missouri Gov. Jay Nixon announced that the Federal Emergency Management Agency (FEMA) has extended disaster assistance to individuals and families in the affected areas. The declaration means some individuals may be eligible for federal assistance to cover uninsured losses or expenses, such as temporary housing, home repair and replacement of household items.

Nixon declared a state of emergency and deployed the Missouri National Guard to the area shortly after the storms struck, and he toured the area on Monday. “Our priorities are search and rescue operations, providing medical care to the injured, and providing a safe environment for the affected communities,” Nixon said in a statement. “This quick federal action will help provide the resources to assist Missouri families with their recovery in the tough days ahead.” Missourians can contact FEMA directly at 1-800-621-3362 or apply for disaster assistance online at www.DisasterAssistance.gov.

As of Tuesday, Joplin was directing residents to stay inside if their homes were intact and was providing shelter information on the city website. Many businesses and public buildings were closed Monday, including the municipal courts and public schools. Volunteers were being directed to a central coordination center at the Recreation Center at Missouri Southern State University. Volunteers’ services are appreciated, but to be effective, will need to be coordinated through this centralized location. “The city has activated its Emergency Operations Center, and is working closely with American Red Cross, emergency management services and medical personnel of numerous surrounding communities to assess the damage and assist those hurt in this storm,” the Joplin website says. “We appreciate everyone’s patience, and ask if you do not have to be out in the city to please stay home and help your neighbors and friends as needed.”

Updated information on the city’s efforts are available at Joplin’s Facebook page and on the city’s website. Read Nixon’s full statement on the federal disaster zone declaration.

Watch one resident’s video of surviving the storm with several others in the cooler of a local convenience store.