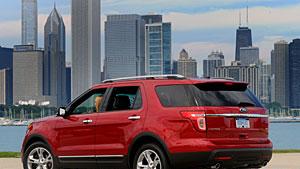 Versatile is one word Ford executives use to describe the 2011 Explorer. "We expect the 2011 model to be used in many different applications for government customers. A couple of those applications include

Versatile is one word Ford executives use to describe the 2011 Explorer. “We expect the 2011 model to be used in many different applications for government customers. A couple of those applications include the 4 by 4 capability, which is used by state and local agencies, such as parks agencies or airports or within government departments or divisions of natural resources, where they need that capability,” said Tony Gratson, Ford’s government sales manager. 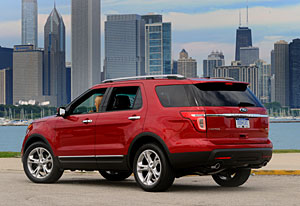 Other levels of government also rely on Ford Explorers, Gratson told Govpro.com. “We actually also sell them to federal agencies, as well. Federal departments, through the federal General Services Administration (GSA) fleet organization, typically buy the 4 by 4 and use the vehicle for off-road purposes.”

Fire departments also use Explorers. “It’s used by fire chiefs frequently as a vehicle to get around in any type of environment, including urban. Actually, the fire department application is very popular where the terrain requires it, such as hills, mountains, etc. There’s a large breadth of applications for the 2011 Explorer SUV for fire chiefs,” Gratson says.

Ford has not forgotten other public safety applications for the 2011 Explorer, including law enforcement. Ford’s 2010 Explorer had a special service package with off-road capability that law enforcement agencies around the United States embraced as a heavy-duty all-purpose vehicle. The benefit of the Explorer for police departments: its large cargo hold accommodates additional police equipment.

The new Ford Explorer-based Police Interceptor Utility was introduced last week at the 2011 Detroit Auto Show. The sturdy SUV is reinforced for police use and offers four-wheel drive and a 3.5L V6 engine. Many Ford sporty utility vehicles have been used by police departments, but this is the first time that Ford has offered a factory-built SUV strictly for police use.

“We do quite well with the Explorer; we sell about 5,000 a year to local, state and federal government agencies,” Gratson says. “In the government market, the Explorer gets about 60 percent of sales (based on registrations data) in the medium utility segment, which is the vehicle category for Explorer.”