Pace of government construction will ease in 2011

Tight budgets will restrict state and local government construction projects in 2011, say analysts at FMI, a management consulting and investment banking firm that serves the engineering and construction industry. 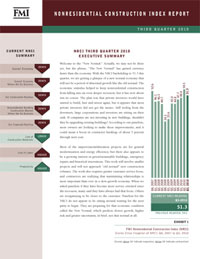 Construction industry executives who voluntarily serve on FMI’s Nonresidential Construction Index (NRCI) survey panel say the number of new projects from states and local governments will drop in 2011. Two out of every three of the respondents on the panel expect state and local budgets to be cut more than 5 percent in 2011, with some cuts deeper than that. Because states and local governments must show balanced budgets, most are being forced to make cuts in all areas. Federal government funding will help shore up some budget shortfalls, but until tax revenues pick up, some of the government construction projects will be shelved.

A whopping 95 percent of the NRCI survey panelists say changes in state and local budgets will affect their markets in 2011. The NRCI survey panel responses are based on the experience and opinions of the construction industry executives, and the analysis is based on FMI’s interpretation of the aggregate results.

FMI predicts that reduced tax revenues and voters’ rejection of new taxes will be in the news in 2011. Tight government budgets will force politicians to think creatively about funding when they propose rebuilding or upgrading bridges, roads, and water and wastewater systems, or public school buildings in 2011, says FMI.

More governments may look to public-private partnerships (PPPs) to fund critical infrastructure projects in 2011. “The private side of the PPP relationship is usually looking for a relatively secure and predictable stream of profits, while the public side of the PPP is looking for an influx of funds and the benefit that comes from the private developer’s expertise in managing and building projects like roads, bridges and water/wastewater systems,” according to FMI.

We can expect to see more PPP proposals on government agendas in 2011. “Currently, PPPs offer some of the best solutions to the problem of repairing our crumbling infrastructure,” say FMI analysts in their NRCI report for the third quarter of 2010.

For more 2011 predictions on government and public works construction, check out the 2011 Keating Report on government budgets, spending and construction which will be posted in the near future on www.govpro.com.