The traffic was probably light

A man in Jerome, Idaho, asked authorities to arrest and deport him to Mexico,then stole a police car when they refused. 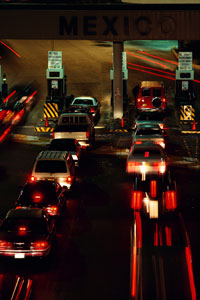 Most immigrants do not want to be deported. So, police in Jerome, Idaho, were surprised this month when a man there asked authorities to arrest and deport him to Mexico. When they denied his request, he stole a squad car and tried to drive there himself, according to the Idaho Mountain Express. Guadalupe Cruz-Vasquez, 38, went to the Jerome County Sheriff’s office on Jan. 3 and demanded to be deported, according to the newspaper.

Police Sgt. Duane Rubink says authorities declined to take the Jerome resident into custody, so he walked to a nearby police station, broke the window of a squad car and drove away with the vehicle.

A cell phone inside the vehicle helped police track its location to Carey, Idaho, where the car ran out of gas. Cruz-Vasquez was arrested and charged with grand theft, but the Mountain Express report does not say if he is scheduled to get his wish for deportation.