Municipal fleets are challenged to use alternative fuels to reduce pollution while holding the line on expenses.

Rick Longobart says that, while local governments are driven by profits, in some ways their job is even harder than their private sector counterparts. For example, buying vehicles for his operation becomes complicated and more expensive because he is squeezed between the demands of the taxpayers and the politicians. Longobart — who manages 900 vehicles in Santa Ana, Calif. — readily admits the fleet does not have the luxury to make equipment acquisition decisions purely on economics. 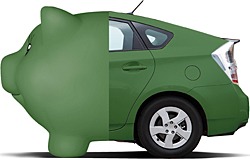 “We’re driven by the mayor, the city council and county seat,” Longobart says. “And they demand that we try to run as green an operation as we can, while still providing all the services the city’s residents expect.”

That is a tall order for any fleet manager to fulfill, much less one in local government where falling tax revenues driven by the recession have crimped city and county budgets. To meet both the green mandates and budget limitations, local government fleet managers are embarking on an environmental strategy with a twist — how to be “green” while saving as many “greenbacks” as possible — all without compromising the effectiveness of fleet operations.

For example, take the ubiquitous police cruiser, which often parks with the engine idling for hours as police officers conduct traffic stops and investigations. The engine idling is necessary because it powers the computers, radios and other electronic gear vital to a law officer’s job.

To reduce the time police cars idle, Santa Ana retrofitted 25 of its cruisers with battery packs nestled in the vehicle’s trunks — packs that provide four hours of “engine off” power. That upgrade saved the city $60,000 in fuel costs in just one year, without sacrificing the necessary tools of the police officers. And, in about two years, Longobart figures, the fuel savings should completely pay for the cost of the battery packs. “This is just part of our strategy, to always strive to find new ways to reduce emissions while generating costs savings at the same time,” Longobart says.

No matter the size or scope of the operation, city and county fleet managers recognize that they are working in cost-conscious times. “We’ve always had to deal with the taxpayer and how we spend the taxpayer’s money,” says Joe Biluck, director of operations for Medford Township Public Schools in Medford, N.J., which operates about 100 school buses.

“But spending $100,000 for a new ‘cleaner’ bus instead of keeping our current units on the road for four or five more years is difficult to do in these budget-constrained times,” he says. “That’s why public sector fleets are typically one to two years behind the private sector [in adopting greener technologies,]” Biluck says.

“Regardless of fleet size, there is only so much money in any municipal fleet’s budget to buy so many new vehicles per year,” Longobart says. “The question always turns on: how are you going to pay for it?”

Public fleets already are trying to cope with the addition of new, more expensive emission control technology added to diesel-powered trucks because of mandates by the U.S. Environmental Protection Agency over the last decade. Exhaust gas recirculation systems (EGR), for example, introduced in 2007, added an extra $4,000 to $8,000 to the cost of a heavy-duty diesel truck. Advanced EGR and selective catalytic reduction technologies rolled out in 2010. Meeting those mandates adds up to $10,000 more per truck.

To cope with the higher sticker prices, many public fleets are extending the life cycles of their trucks. “We’ve extended the life cycle on our trucks by five years as a result, going from 10 to 15 years total,” says Dick Weston, president of the Public Fleet Managers Association and fleet manager for Thurston County, Wash. “But keeping a vehicle longer means more maintenance will be required. That’s a problem when you have a finite budget.”

It gets even more complicated, Weston notes, when demands for alternative fuels and green fleet operations get added into the mix. “We may get [clean air] mandates from my elected officials alongside those of federal and state officials, too,” he says. “Often times, they don’t care what it costs to do that. But I have to care, because I have to spend the money to do it. Thus, we, the fleet, are often caught in the middle.”

Longobart says green savings cannot be restricted to a fleet’s vehicles alone. The entire operation must be examined from top to bottom to find ways to both meet environmental objectives and reduce bottom line costs.

In Santa Ana, that means adhering to what Longobart dubs the “three-legged stool” strategic approach. “It starts with a business plan and alternative energy plan; that’s the first leg. The second leg is administrative support. Finally, the third leg is changing human behavior — that’s the biggest obstacle,” Longobart says. “You can invest in all the green efforts you want, [but] if personnel doesn’t use it, or know how to use it properly, it’s worthless.”

It also requires what he calls “non-conventional thinking” to sniff out potential savings from greener operational practices. “You really can’t take a ‘business as usual’ approach to these things,” he says.

The city’s solar-powered vehicle washing facility is one example. Not only does it use the sun’s energy for power, all the water is recycled, making it a closed loop system with no environmental impact, and eliminating the need for the city to pay for electricity to run it.

Longobart also is not shy about his department’s efforts to tap into federal and state grants to help fund alternative fuel efforts — a great way for any cash-strapped city to go green without breaking the bank, he says. “Over the last several years, we received $7.2 million in grants,” he says. “For example, we just installed a $600,000 compressed natural gas refueling station that was 60 percent paid for by grants. That kind of funding has allowed us to experiment with many different alternative fuel options as well: propane, biodiesel, even hydrogen-powered cars.”

Santa Ana also envisions using the CNG refueling site as a step in becoming an alternate fuel “hub” not only for its own fleet but for private-sector operations and the general public as well — opening up revenue-generating possibilities in the future.

At the same time, Longobart stresses that simple tactics, such as car sharing among various city departments, offer a way to cut costs as well as emissions.” Not only do you eliminate emissions by sharing vehicles, you eliminate entire vehicles as well, saving on acquisition costs, maintenance expenses, fuel costs, etc.,” he says. “You just need to be rigorous in your examination of fleet vehicle use.”

It is that thorough approach that more public fleets may be using in the future as they seek to become greener, Weston says. “I love new technology, and I am all for making the environment cleaner, but the problem is we’re dealing with finite budgets in the public sector,” he says. “You can’t raise taxes to generate the revenues you need to fund the acquisition of new technologies like these in tough times. It’s certainly easy to pass green legislation, but it’s very hard to fund it. We just have to be more realistic in our approach today.”