A funeral is scheduled for Saturday for Springfield, Ill., Mayor Tim Davlin, who was found dead in his home on Tuesday from an apparently self-inflicted gunshot wound. 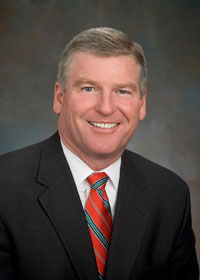 A funeral is scheduled for Saturday for Springfield, Ill., Mayor Tim Davlin, who was found dead in his home on Tuesday from an apparently self-inflicted gunshot wound. Davlin had been the city’s mayor since 2003 but had recently announced that he would not run for re-election next spring, according to the Chicago Sun-Times.

Police found Davlin’s body in his home after he failed to appear in court for a hearing on his handling of a relative’s estate, according to the Sun-Times. A coroner told the newspaper that a coroner’s jury would have to decide if the self-inflicted gunshot was an accident or a suicide.

Davlin’s funeral was scheduled to be held at the Blessed Sacrament Church on Saturday, and the city has created a memorial page for him on the city’s website. On the site, Davlin was remembered for overseeing change in downtown Springfield, including the opening of the Abraham Lincoln Presidential Library and Museum. “Tourism efforts have accelerated to the point that Springfield has hosted nearly a dozen auto shows, the Cadillac of which is the highly successful Route 66 Mother Road Festival,” the site reads.

Davlin also had successfully lobbied for a state bill that will make it easier for the city to meet its future police and fire pension obligations. He implemented an economic development initiative that led to the expansion of numerous businesses in the city and did much to improve the city’s infrastructure, according to the city’s website. “Mayor Davlin will probably best be remembered by one of his most successful programs, ‘Springfield Green,’ a citywide environmental improvement program, which not only promotes planting trees, flowers and greenery, but also stimulates cleanliness through an Adopt-a-Street program,” the site reads.

Memorial contributions may be made to: Timothy J. Davlin Grandchildren Scholarship Fund, care of Heartland Credit Union or to the Blessed Sacrament Building Fund.