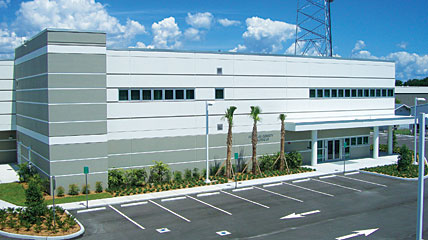 After two devastating hurricane seasons in 2004 and 2005, which resulted in more than $170 billion in damage, leaders in Pinellas County, Fla., realized their emergency response efforts needed improvement. The newly completed Public Works Operations Building and Vehicle Storage Building are designed to withstand a category 5 hurricane, and serve as the Public Works Emergency Operations Center and shelter for first responders during a storm. Together, the two buildings offer a secure, central base of operations for first responders, as well as shelter for the equipment, vehicles and materials necessary to clean roadways and provide direction and communication for medical, emergency and law enforcement teams following a hurricane.

The county worked with a local design-build team, and the project was completed $4 million under budget and one month ahead of schedule. The operations building includes men’s and women’s dormitories that sleep up to 50 first responders and a commercial kitchen that is equipped to serve 300 meals per day. The emergency operations center is equipped to become the center of operations for the public works department in a post-storm environment. The electrical and mechanical systems provide for seven days of sustainability in the case of a major catastrophe.

The vehicle storage building provides for warehouse and storage, and it houses county vehicles during normal operations. It also includes additional power, data and phone drops and a manual transfer switch for a generator that can be moved throughout the county to support field staff after a storm.

“This project is very important for us to be prepared for a major storm event and to maintain our ability to lead recovery efforts,” says Pete Yauch, director of public works and transportation for Pinellas County. “In the event of a storm, this facility has the provisions to house many agencies working together.”