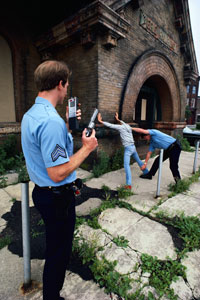 Colonie, N.Y., has the lowest crime rates in the country, according to Washington-based CQ Press’ “City Crime Rankings 2010-2011: Crime in Metropolitan America,” released on Nov. 22. However, the Washington-based U.S. Conference of Mayors (USCM) issued a statement days before the release of the CQ Press report that claimed the publication misrepresents cities’ actual crime rates.

This was the second year that Colonie topped the list. The city reported only 61 incidences of violent crime in 2009, the second lowest number of all 400 cities included in the rankings. O’Fallon, Mo.; Ramapo, N.Y.; and Mission Viejo, Calif., also had some of the lowest crime rates, according to the report. St. Louis saw the highest crime rates, according to the report, and it had the second highest rate of violent crime for 2009, with 2,070.1 violent crimes per 100,000 population, compared with a national average of 429.4. Behind St. Louis with the highest crime rates are Camden, N.J.; Detroit; Flint, Mich.; and Oakland, Calif.

However, USCM called the report “a premeditated statistical mugging of America’s cities.” “These rankings represent a gross misuse of FBI data,” said Houston Mayor Annise Parker, chairperson of USCM’s Criminal and Social Justice Committee. “Everyone with the slightest knowledge of this issue knows the rankings are not credible, but the publication persists with them, presumably because rankings are popular and sell books. Unfortunately, they also do real harm to the reputation and economy of the cities that come out on the losing end, often through no fault of their own.”

USCM cites what the association, along with others including the FBI, American Society of Criminology, and Criminal Justice Journalists, consider to be the CQ Press report’s flaws:

• Factors unrelated to a city’s actual crime risk, such as geography, can affect its ranking in the report. Cities that are geographically small and do not include as many middle-class areas as larger cities are arbitrarily penalized.
• Different crime measurement and reporting systems in the ranked cities could misrepresent the real differences in crime between given cities.
• The city in which a person lives is not as important in determining crime risk as age, lifestyle and the neighborhood within a given city where an individual lives.

CQ Press says it calculates the crime rate rankings of the cities and metropolitan areas using six crime categories: murder, rape, robbery, aggravated assault, burglary and motor vehicle theft, based on statistics from the FBI’s Uniform Crime Reporting (UCR) Program in September 2010. However, USCM contends that ranking cities in that way “[provides] no insight into the many variables that mold the crime in a particular town, city, county, state, region, or other jurisdiction,” according to the USCM statement. “Consequently, these rankings lead to simplistic and/or incomplete analyses that often create misleading perceptions adversely affecting cities and counties, along with their residents.”

In 2007, the Conference of Mayors passed a resolution in opposition to the rankings (http://usmayors.org/resolutions/75th_conference/csj_05.asp) that states that the conference is working with the FBI and the U.S. Department of Justice to “educate reporters, elected officials, and citizens on what the data means and doesn’t mean.”

Read information on purchasing the CQ Press report and download the USCM response.