Let’s go to the video

The Miami Beach, Fla., Parking Department manages street and lot parking throughout the city, including six multi-level garages. As a matter of course, cars get vandalized, have accidents and are stolen, and often the parking garage owner takes the blame. To reduce its liability at its parking garages, the Miami Beach Parking Department has installed surveillance cameras. 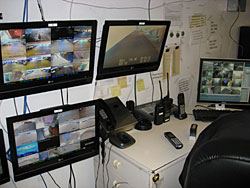 In June 2008, the city began installing analog cameras from Monmouth Junction, N.J.-based Infinova in two of its parking decks. Each garage was equipped with 107 cameras, which are left visible to help deter crimes. Images from the cameras are transmitted to a storage area network in each garage that stores 120 days of recorded images.

The department uses three basic strategies when placing cameras. First, at each entrance and exit, the surveillance system captures the car, the license plate and the face of the driver, going in and out of the garage. The images provide a record of who was driving the car, which helps in determining claims of theft.

Second, cameras cover all main driveways in and out on all floors. It is at the turn points where most accidents occur. With the video, there is documentation of who was at fault.

Last, cameras record video on all down ramps, which is where the majority of vandalism incidents occur. With a clear image of the perpetrator, law enforcement has a tool to find and convict the vandal.

The original cameras were installed when analog was the only way to go, and the parking department continues to install the cameras in the rest of its garages. It has prepared for an eventual upgrade by installing encoders and decoders on the cameras to provide digital signals, and cabling that can carry digital signals. When the department ultimately switches to IP cameras, it will not have any additional transmission costs.

The parking department also plans to install a central monitoring system that will store video from all of the parking garage cameras at one site. Garage-to-garage transmission will occur over fiber and/or wireless systems, which the city already has installed.