Doubling down on water supply

City invests in its water plant to ensure supply for residents and businesses.

Fairfield, Calif., located between San Francisco and Sacramento, recently expanded the size of one of its water treatment plants to meet the needs of its growing population. The $67 million project almost doubled the Waterman Water Treatment Plant’s capacity and integrated new technology into the treatment process. 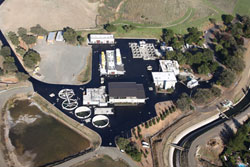 Fairfield’s ample and steady supply of water is often a key factor for attracting businesses. When the Waterman plant originally started construction in 1974, it was largely to supply water to an Anheuser Busch brewery. Food and beverage companies continue to choose Fairfield, often because of the importance of water in manufacturing. A few years ago, when Calbee America, a subsidiary of Japan-based Calbee Foods Co., Ltd. was looking for a new site for a manufacturing plant, CEO Masanori Yasunaga said it was Fairfield’s “excellent water quality and supply that were a major factor in our decision to move here.”

To continue to supply water to growing businesses and 107,500 residents, Fairfield began expanding the Waterman plant in March 2007. Kiewit Pacific Co., a subsidiary of Omaha, Neb.-based Kiewit Corp., was the contractor on the project. In addition to expanding water treatment capacity from 16 million to 30 million gallons per day (mgd), the project incorporated the Actiflo high-rate sedimentation process, developed and patented by France-based Veolia Water Solutions & Technologies, to change the way the plant removes impurities from the water, improving microbial protection and water quality. It also modernized chemical handling by constructing a building dedicated solely to storing and metering water treatment chemicals. The plant’s existing filters also were rehabilitated.

The expanded plant, located in the northwest part of the city, supplies water for Fairfield and to neighboring Suisun City and parts of Vallejo upon request. Water from the Lake Berryessa reservoir, located 25 miles away, arrives at the treatment plant through the Putah South Canal. A second plant, the North Bay Regional Water Plant, located near Travis Air Force Base, provides up to another 27 mgd capacity for Fairfield.