Residents of the Linden-Grove area in Reno, Nev., have a brighter, safer play area in Yori Park, where new exterior LED luminaires were installed last year. The new lights were installed as part of a larger neighborhood revitalization project that aims to reduce blight and crime in the area. 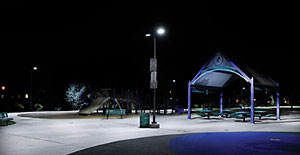 Through a neighborhood survey, residents in the Linden-Grove area indicated that it was a high priority to have the light fixtures in Yori Park repaired. The old copper wiring for the lights had been stripped out of the underground conduit, leaving the park completely dark and a frequent spot for drinking, drug use and other crimes.

The city began searching for new light fixtures that would resist vandalism, conserve energy and direct light where it was needed. City officials decided to install 18 LED luminaires from Sturtevant, Wis.-based BetaLED that use smaller size wiring, which would save money and be hard for vandals to strip out again. Additionally, the LED luminaires have backlight shields that prevent light from spilling into neighboring yards.

The LED luminaires consume 60 percent less electricity than the park’s previous high-pressure sodium fixtures, and they continue to illuminate the area even if several are broken. The lights are on a low mode all night, but motion sensors turn the lights on high when there is activity in the park after hours, alerting police to possible crimes. Parks Director Julee Conway and police say that families are frequenting the park again and are grateful that the community listened to their concerns and made the park safer. “These lights are a huge safety enhancement for the officers and residents of the area,” says Officer Russ Stewart of the Reno Police Department.

The $30,000 lighting project was paid for using Community Development Block Grants and Community Pride Grants approved by the Council and Ward 2 Central Neighborhood Advisory Board. “We are making the park safe for everyone, and these lights will be around for years and years to come,” says Barbara DiCianno, community liaison.