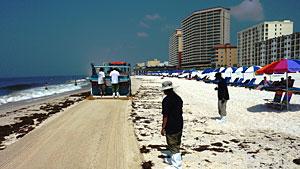 Even as Gulf oil spill news coverage has diminished, a fleet of BeachTech beach-cleaning machines is still at work, removing oil from beach sand. BP is using 25 BeachTech sand-sifting units on beaches in Alabama and Florida for oil removal on an ongoing basis.

Even as Gulf oil spill news coverage has diminished, a fleet of BeachTech beach-cleaning machines is still at work, removing oil from beach sand. 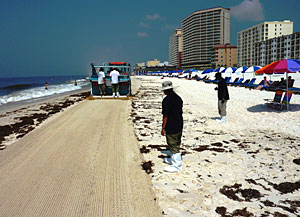 BP is using 25 BeachTech sand-sifting units on beaches in Alabama and Florida for oil removal on an ongoing basis.

According to Scott Merrill, manager for Reno, Nev.-based BeachTech North America Operations, the question of how and when to clean the oil from the sand became an issue. “With the heat, the oil returns to a semi-liquid form during the middle of the day, so you cannot use mechanical equipment to clean the beach during the day, as it is not effective.”

Much of the beach-cleanup effort has been concentrated at night, but that brings its own challenges, Merrill says. “Working at night opens up another set of environmental issues, for example, turtle nesting habitats,” he says. “All parties, from BP to state Fish and Wildlife Department officials, worked on a solution to be able to groom at night with minimal impact to the animals and creatures that live within the beach. No one wants to hurt any of the life of the beach, but the oil needs to be removed in order to protect the species. It was a win-win situation, and as a result of all the testing, we figured out what works and what does not work. Those practices have now been incorporated into the ‘best practices’ strategy of BP as it relates to beach cleaning.” 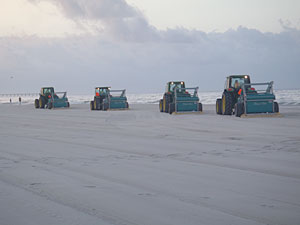 A whole host of BeachTech sifting machines are involved in the Gulf cleanup, including the BeachTech 3000, BeachTech 2800, BeachTech 2000, BeachTech Marina and BeachTech Sweepy Hydro. “There is a BeachTech machine for every oil scenario from the initial giant globs to the small peanut-size tar balls, and all are being used effectively,” Merrill told Govpro.com.

How long the clean up process will last is anyone’s guess, Merrill said. “Will it end over night? No. Will it go on for years? No one is sure, but for the next few months, the BP Gulf oil spill clean up will be one of the biggest efforts ever undertaken in memory.”

And the effort is huge, Merrill said. “I heard one BP official say that they have mobilized more people and equipment in 30 days than the entire D-Day military effort in World War II — and that effort had over a year to plan,” he said.

Merrill told Govpro.com: “Regardless of where oil threatens beaches, and no matter how long it takes to clean up the oil, BeachTech’s equipment, additional manufacturing capacity, service support, and beach-cleaning consultation expertise will be used to help ensure that the sugar-sand beaches of the Gulf Coast are restored to their natural beauty.”