Savvy contractors and vendors know that right now, before Sept. 30, during the federal government’s fourth quarter, is a great time to land government business. For 12 years running, in fact, federal agencies awarded more purchase contracts in the fourth quarter than in the previous three quarters, according to a Federal Procurement Data System report.

And the federal market is huge. Federal government purchases of goods and services will exceed $1.2 trillion in 2010, according to a recent analysis from St. Louis, Mo.-based consultants Macroeconomic Advisers and reported in a previous GovPro.com article.

Arlington, Va.-based consulting firm, The Griffin Method (TGM), is an organization that contractors and vendors turn to when they need help selling to federal agencies. TGM provides services and products that help government contractors navigate the federal procurement and contracting process: from the fundamentals of locating federal opportunities to the steps needed to write winning proposals. 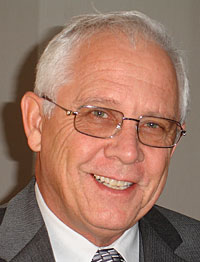 TGM offers a process for precision marketing and proposal writing for successful federal contracting. Founder and CEO Dick Griffin’s executive experience as a contractor includes 13 years as owner/manager of construction companies, nine years as executive officer/owner of a small manufacturing company, and six years as CEO of The Griffin Method.

His second career in federal service included nine years as an information technology executive, policy analyst and senior project director while at the U.S. Department of Education, the U.S. Department of Labor and the White House. While in federal service, Griffin became Defense Acquisition University-certified as a contract specialist and worked with companies that contracted with the federal government.

In addition to providing consulting, proposal management and writing services, Griffin travels the United States, hosting seminars and teaching companies the techniques of precision marketing to federal agencies. His seminars also cover the how to’s of preparing winning proposals.

Govpro: Is there much opportunity selling to federal agencies?

DG: The federal government is the largest purchasing entity in the entire world, and they buy virtually everything. It doesn’t matter whether a company sells products or services, hardware or software, technology or construction. As long as they sell solutions, they can find a customer within the federal government.

Govpro: What’s the difference between selling to Uncle Sam and selling to the private sector?

DG: Government contracting officers, project managers and technical officers live in a world that’s very different from the corporate environment with which traditional business are most familiar. If you want to play in their world and do business with government personnel, you need to play by their rules; and those rules can appear to be cumbersome, extensive and difficult to navigate.

Govpro: Are there any strategies especially suited for the 2010 end of fiscal year?

DG: In practice, there are a couple of “best strategies” that vendors can use to capture federal business during the annual end-of-fiscal-year rush to close out federal contracts. The very best is to have been in dialogue with a program office that buys what you sell earlier in the year.

Having a pre-packaged offer to do something they know they need to do helps a lot. Because the timeline between announcement and response is short, there usually is not enough time for a program office to develop a good statement of work — so savvy contractors are handing out white papers now, hoping the program offices will use the ideas and suggestions as guidelines for the RFP/RFQ they assume will have to happen before Sept. 30.

Savvy contractors are talking to their contacts right now about adjustments to provide the embellishments to existing contracts during this quarter, also. Many contractors know that they have even less time to develop a response, so they are working out the proposal to support those submitted-idea white papers right now.

Govpro: Can vendors still get into stimulus-funded programs that are in place through the American Recovery and Reinvestment Act of 2009 (ARRA)?

Vendors that benefit through ARRA-funded projects include those that sell commodities, manufactured products and items built to specifications. The end result is jobs for people working in subcontracting sites that produce components for bridges, signs, paint, equipment and services like engineering, quality assurance, technical testing, etc.

Govpro: What does TGM see for ARRA-funded projects in the remainder of 2010 and 2011?

DG: For the year 2010, when about 60 percent of ARRA funding was dedicated to various “shovel ready” construction projects, the trickle-out benefit went to industries that support heavy construction industry. For 2011, when about 20 percent of the ARRA money will be committed to support “green” and alternative

energy projects, the trickle out should result in jobs in small shops producing components that will be used by contractors winning those projects.

Govpro: What about opportunities in the federal marketplace compared to the private sector in 2010?

DG: According to the U.S. Small Business Administration, the government spends nearly $98 billion on contracts with small businesses each year, and last year alone, TGM’s efforts earned our clients more than $400 million in contracts. With that sort of money on the table, the pursuit of government contracts provides a logical alternative for businesses that are struggling in the commercial environment. The alternatives aren’t nearly as pretty.