In the formula for creating "green" cities, the blue stuff plays a critical role.

After Greensburg, Kan., was almost completely destroyed by a tornado in May 2007, the city created a plan for rebuilding into an economically, environmentally and culturally sustainable town. The city council approved a resolution to construct all city buildings to LEED Platinum standards. Nonprofits are encouraging residents to build energy-efficient homes. In turn, Greensburg has become something of a model for what cities could do if given the opportunity to start over with an eye toward sustainability. 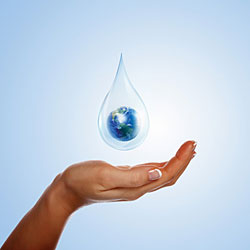 That opportunity, however, is rare. Instead, as local leaders envision what they want their communities to look like in the future, they must find a way to balance innovative planning with existing infrastructure. That is particularly true for water management, where aging infrastructure meets infinite possibilities from new technology, expanding community interest and a renewed focus on sustainability at all government levels.

The Alexandria, Va.-based Water Environment Federation and the London-based International Water Association (IWA), among others, are looking at water as part of a “Cities of the Future” concept, originated by Cambridge, Mass.-based CDM. The two groups organized a conference on the topic in March that included discussions about what water would look like in an ideal city where projects have multiple community benefits, stakeholders work across institutional barriers and urban centers are restored. With mayors and other leaders from Philadelphia to Los Angeles looking to create green and sustainable cities, Cities of the Future organizers say it is becoming clearer that water management cannot be separated from the broader context of the city and its initiatives and objectives.

“The Cities of the Future concept is significant in water because it represents a higher level focus on how differently we are managing water resources in cities than in the past,” says Paul Brown, executive vice president for CDM and co-editor of a book on the topic published by IWA. “Today we want a closed loop system. We can’t rely on importing fresh water from other locations. We have to close the loop and use water more efficiently.”

Part of the bigger picture

Water closely ties in with other sustainability and planning efforts in a variety of ways, including reducing energy use, planting more trees and conserving resources. “It’s energy intensive to move water,” Brown says. “If we’re interested in carbon footprinting and emissions associated with pumping water all over the landscape, it is quite energy intensive.”

That is the case in Asheville, N.C., where one of the main water challenges is pumping water to the mountains, where growth and development continue to occur. “Water usage is very connected to energy use here,” says Maggie Ullman, Asheville’s sustainability coordinator. City leaders have set a goal to reduce the municipal carbon footprint by 80 percent by 2050, and 29 percent of that footprint is occupied by the water department, which is almost triple the size of any other department, according to Ullman. “There is going to have to be a connection between elected official policy and water for sustainability,” she says.

To identify inefficiencies, the city has conducted energy audits on as many of its water facilities as possible. Asheville consequently was awarded federal stimulus money to implement some of the improvements identified in the audits, including replacing one oversized pump that was costing the city thousands of extra dollars every year in additional electrical capacity. As part of its Sustainability Management Plan, which recently earned the 2010 Sustainability Award from the North Carolina Chapter of the American Planning Association, the city’s Water Resources Department is looking at energy recovery, solar photovoltaics and wind and geothermal energy. “We are looking for the nexus where energy efficiency and better water production merge,” Ullman says.

Conveyance also is an issue in Los Angeles, where 85 percent of water is transported from an outside source. “To be a sustainable city, we have to maximize water generated here and reduce dependence on imported water,” says Adel Hagekhalil, assistant director for the Bureau of Sanitation. “We need an integrated plan to look at water — potable, recycled and stormwater. We believe stormwater is the future to meet demand if we can harvest it and replenish groundwater aquifers.”

Over the past 10 years, the Department of Public Works and Department of Water and Power have created a comprehensive Integrated Resource Plan (IRP) to look at the various aspects of water management. To meet growing population needs in Los Angeles, the mayor’s water plan focuses on meeting half of the new demand by 2030 through conservation and the other half through water recycling. “By doing integrated planning, we are not only reducing dependence, but also providing that infrastructure for water conveyance doesn’t have to be upsized,” Hagekhalil says. “We also need to look at recycled water being available in areas with the highest plain so that conveyance is cheaper.”

Philadelphia’s water efforts also play a key role in the city’s goal to become the greenest U.S. city by 2015. The Philadelphia Water Department’s Office of Watersheds plans to roll out a $1.6 billion green infrastructure plan that includes rain gardens, green roofs, pervious pavement and trees to recycle and reuse rainwater. “The Green City, Clean Waters program is not only vital to the water department’s mission of clean and safe water, but to the broader mission of government to improve the quality of life for its citizens,” says Philadelphia Deputy Mayor Rina Cutler. “Our mayor’s commitment to making Philadelphia the greenest city in America is well served by this program that encourages water infrastructure dollars to be spent in the most sustainable fashion possible.”

Looking ahead to how cities can function differently, the community is becoming more crucial. “We need to not only do projects that help with water, but also give to the community because they can be a part of that,” Hagekhalil says. For example, the bureau is using $26 million in Proposition O funds — dedicated to water quality projects — to convert a rail yard into a 9-acre wetland park that will treat stormwater while also creating a community-oriented open space. The park will include pedestrian trails, observation decks and a community center. “It’s a stormwater effort to clean the water, but also gives back to the community,” Hagekhalil says.

Also, this year, the Los Angeles Bureau of Sanitation teamed with homeowners, nonprofits, and other city and government agencies to turn flood-prone Elmer Street in the San Fernando Valley into a model of green infrastructure equipped to capture and store rain as part of its Green Streets initiative. (View our sidebar on the Elmer Street project.)

Los Angeles also has made residents a key part of its planning. In creating its IRP, the water department engaged more than 1,000 stakeholders through workshops, meetings and reviews. Now, an advisory group formed as an offshoot of the IRP representing nonprofits, businesses and community groups meets regularly to address the city’s focus on recycled water. Hagekhalil says community support for recycled water use will be key to its success.

Asheville has been motivated to conduct the energy audits of its water facilities by its Sustainability Advisory Committee on Energy and the Environment, which is comprised of residents. Ullman says the committee also has been responsible for the city looking at renewable energy for pumping facilities. One of the properties, for instance, has the opportunity for a large solar farm, and Asheville is trying to court the necessary investors. “We wouldn’t have pursued that without the city council looking at our carbon footprint and citizen input,” Ullman says.

Philadelphia is continuing its popular Model Neighborhoods program — still in the experimental stages — to work with residents to turn their neighborhoods into models of innovative stormwater management. “With the Model Neighborhoods program, we begin to understand what benefits [residents] and what would encourage them to put in rain barrels or rain gardens,” says Howard Neukrug, Philadelphia deputy commissioner for Environmental Services. “The biggest thing we’re trying to figure out is how we create incentives to make a change in the city that solves our very basic core mission needs — water quality — in a way that leverages other basic needs for the city.” (For information about one of the city’s projects, view the Big Green Block project sidebar.)

In encouraging community involvement, Neukrug has found it key to speak the language of the community and point out how the projects are about more than water management. “One of the most interesting things has been that, as a utility, when we talk about water and stormwater, our topic is really city planning, sustainability, climate change and broader issues,” he says. “Water is our objective, but our language needs to be in an urban context. Attention from our stakeholders grows as we talk in their language.”

Philadelphia’s focus on stormwater management has extended to the business community, attracting the interest of the Sustainable Business Network (SBN) of Greater Philadelphia. SBN has started to look at stormwater as a niche industry that could benefit area businesses, such as landscape architects, engineering firms, green roof designers and arborists. As a result, earlier this year, companies formed Business United for Conservation, a group that is exploring the profits, jobs and training opportunities in the Philadelphia stormwater industry.

Taking a city into the future necessarily involves making changes at the planning level, where development is influenced. “Since the Progressive Era, we have developed building codes, ordinances, planning requirements, and land use and zoning requirements that are meant to steer the direction of urban growth,” Brown says. “But they are all based on the traditional model of what water infrastructure is supposed to do. They lock us into building tomorrow’s cities to look a lot like today’s.”

To steer developers and landowners toward designs that help capture rain, this summer, the Philadelphia Water Department (PWD) changed how it charges for stormwater management. Fees are now based on how much land in a private property is draining to the system and how much of the property is impervious. The department is not making more money, but it is charging for the true cost of stormwater management, Neukrug says. For those whose bills went up, PWD provides consultant services to help them better manage stormwater on their property.

In designing new policies, Asheville wants to ensure that the changes can be sustained over the long term. To accomplish that, it created the Green Team, a stakeholder group to look at internal procedural policy. “I can tell you how to be energy efficient, but the police department has a different system than I do,” Ullman says. “You can’t assume you understand other people’s jobs. It’s a collaborative process. You don’t just make a generic rule that’s hard to follow because you simplified the whole process.”

The first initiative they decided as a group was a green purchasing policy. (The Water Resources Department already had energy efficiency specifications in place for their pumps.) “It saves money in the long run and reduces our carbon footprint,” Ullman says. “If we can do this system-wide, we are looking at the big picture.”

From internal policies and development standards to recycled water use and community involvement, considering every aspect of the big picture is crucial for cities planning for a future that breaks from the past. “It’s not enough to turbo-charge the status quo,” Brown says. “We need the kind of change that’s like going from a gas car to an electric car. You’ve made a major systems change.”