Not long ago, Doug Marsh, architect and associate vice president at the University of Notre Dame, was approached by a group of students who wanted a new walkway to make it easier for pedestrians to cross a busy street at the border of the campus and South Bend. Ind. “We provided the equipment, and the city supplied the engineering staff to install it,” Marsh says. But, he says that the direct involvement of the city’s Public Works Director Gary Gilot “made it happen.” 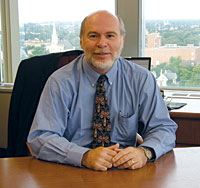 Considering that Gilot also has been able to make happen everything from computerized manhole covers to greenhouse heating with computer servers, the job of installing the new walkway may seem, well, pedestrian. But Marsh thinks it represents exactly what makes Gary Gilot special. “He’s always evolving and growing,” Marsh says.

For his outstanding performance with groundbreaking major projects that are reshaping the public works landscape in South Bend and being held as national models, American City & County magazine has picked Gary Gilot as the Public Works Leader of the Year.

In nominating Gilot (pronounced “jiLOT”), South Bend Mayor Stephen Luecke says that his public works director “represents the best of creativity, innovation and ingenuity in government” and that Gilot has turned the public works department “into a laboratory for new ideas and concepts.” Luecke says that Gilot’s entrepreneurial approach has combined efficiency with an open approach to new ideas that serves the city well. “It’s hard to condense what Gary represents into a short answer,” he says. “He has a ‘can-do’ attitude. It’s never, ‘It can’t be done.’ It’s, ‘How can we do it?’ and then, ‘How can we do it better?'”

At the top of Gilot’s recent accomplishments, Luecke cites the installation of computerized technology to tackle a century-old problem of managing water through its combined stormwater and sanitary sewer system. With 772 other U.S. cities, South Bend is mandated by the U.S. Environmental Protection Agency to reduce combined sewer overflow (CSO) by 85 percent over the next 20 years. Without improvements, the system faces the chronic problem of dumping untreated waste that exceeds its management capacity into its rivers during storms. A total separation of the system is estimated to cost $650 million over the next two decades.

For South Bend, a city of 100,000 residents in Northwest Indiana, fixing the problem with conventional solutions would be extraordinarily expensive. But, with CSOnet, a network of embedded wireless sensors and computerized control systems that Gilot installed in conjunction with Notre Dame and Purdue University engineers, South Bend will become the first city in the world to integrate computerized sensors and motorized controls to prevent overflows. Over time, the city will invest $4 million in CSOnet infrastructure to avoid a projected $120 million in future capital expenses for the same level of environmental benefit. A consulting firm estimated that applying the test program citywide would cut the problem by 25 percent. The project was partially funded with a $3 million federal stimulus grant.

In its first month of service, the network of sensors prevented 2 million gallons of combined sewage and stormwater from being released into the St. Joseph River. It actively retained water from nearby parking lots or other sources of stormwater runoff, only releasing it into the system when the danger of an overflow from the combined sewer overflow downstream had passed.

Michael Lemmon, a Notre Dame engineering professor, recalls that he met with the city about five years ago to identify how the engineering department could apply research to its real-world needs. Gilot was interested in new technology that could apply a wireless sensor network to the water runoff dilemma. “Gary was very supportive and forward thinking,” Lemmon says. “He was willing to consider a nonstandard solution and give it a try to see if it would work. I was really impressed. He was willing to look outside of the box.”

Lemmon believes that the technology employed in South Bend may have application nationwide as cities grapple with the issue of stormwater management, and he has spawned a small start-up corporation to promote the solution. By shifting excess water during heavy storms to pipes underground with excess capacity, the city keeps the overflow out of residents’ basements and out of the rivers. “This is an idea that can go national,” he says. 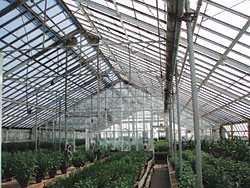 Another project undertaken with Notre Dame that Gilot has shepherded involves using the heat generated by university computers to warm the Desert Dome in the city’s popular greenhouse in Potawatomi Park. Seeking to avoid rapidly growing costs to cool computer servers, the university agreed to place 200 high-performance servers near the greenhouse so that the heat from the computers warms the dome, reducing the dome’s heating bill by 10 percent. The university saved about $42,000 for cooling costs on campus, and substantially reduced its carbon footprint. A high-speed fiber network that Gilot deployed in the city enables the project. “Gary understands the fundamental engineering but also the fundamental science,” says Paul Brenner, who heads science-computing operations at the university. “He is able to integrate the technology with the existing infrastructure.”

Not all of Gilot’s creativity comes through the implementation of high technology. In his quest to economize on winter road maintenance in January 2009, he turned to the lowest of technologies: adding water to salt.

At the time, prices for rock salt were rising, so the city joined with other governments to buy a large quantity of salt at about one-third the market rate. But Gilot figured that 1 ton of rock salt covers four miles of street, but the same amount of rock salt converted to brine covers 19 miles. And, because the salt brine can be applied before storms, the city also could save on overtime pay. In its first year, the city used $160,000 less in salt and avoided $5,000 in overtime costs. In addition, the use of brine reduces the corrosive effect of the salt on the environment.

For his part, Gilot admits that his training in civil and environmental engineering and his advanced degree in business administration influence his approach to the public sector. “The environment has always been what makes me tick,” he says. “We have limited resources, and we have to figure out smart ways to allocate resources. There’s not more and more money to do things.”

Gilot, 53, began his public works career in Elkhart, Ind., in 1984. At the time, he was working as a consultant and received a call from the newly elected mayor, who needed a public works director to straighten out the wastewater treatment plant, which was under a regulatory order. He stayed for 16 years. “They gave me the freedom to be creative,” he says. “I got a different perspective of government that it wasn’t bureaucratic and restrictive. They gave me latitude to undertake applied research projects.”

After the mayor who hired him was defeated, Gilot received an offer from Mayor Luecke and moved to the bigger city in 2000. “He encouraged me to be entrepreneurial,” he says.

The CSOnet project was attractive because “it’s creative, it’s disruptive.” But it was very new, so he wanted to deploy the technology in a trial setting. “You don’t drop new technology, full scale overnight,” he says. “It was conceptual, but I’m open to people’s ideas to improve on the original plan.”

One of the biggest lessons learned is that the system had to be developed to better manage the amount of information moving through it. Rather than sending two men to look into a single manhole cover, the entire system now sends updated information every five minutes. That allows the city to send crews before an overflow, but it also taxes the managers’ ability to monitor the system. As a result, the first change was in data management. “Now, [I] can tell at a glance what the system is telling me,” he says.

The greenhouse project, where heat from university computers heats a greenhouse, is exactly the type of project, with its efficiency and recycling, that excites Gilot’s environmental bent. “Too much keeps us in silos,” he says. “We’ve not done a good job of reducing waste.”

So, working with the university science department was the perfect project in his book. “It takes as much electricity to cool the computers as the energy they use,” he says, effectively doubling the energy use. “This has an environmental impact, climate improvement.”

He sees potential application of the heat transfer concept to the city’s wastewater treatment plant, which requires heat to break down the waste. It also could be used at the city pool, which is heated during some months. Hospitals and other facilities also might be able to use a similar heating system.

The next frontier for South Bend is an improved transportation system that would include a trolley in the city and a high-speed rail line for inter-city travel. Gilot says that both projects are long term but have significant potential for the city. The trolley would run about five miles and connect technology parks, the downtown area and the medical center. Carrying a $25 million price tag, though, it is still some time in the future.

The high-speed railroad costs even more — at least $8 billion, according to estimates — but the project received a head start with a $2.5 billion planning grant from the economic stimulus program. Gilot wants to make sure that the project, which would run from Michigan to Chicago and Wisconsin, includes South Bend as it passes through Indiana. “I used to think that it was very long term, an academic exercise,” he says. “But I think more are realizing that it’s essential for the economy of the Midwest hub for business and commerce.”

As he looks to the future, Gilot is optimistic about others who will eventually take his place, innovating and experimenting. “We still attract a lot of very bright, good young people in this field,” he says. With people like Gilot to encourage his staff to use innovative ways to solve age-old problems, South Bend can be optimistic about its future, too.