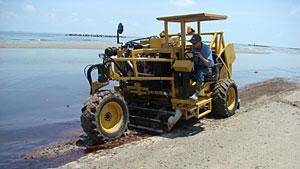 Cherrington Enterprises' beach cleaning equipment is getting a workout on the Gulf Coast. The company got its initial order from BP for beach cleaning gear shortly after the Deepwater Horizon accident. 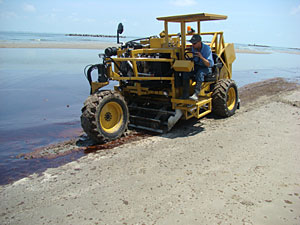 Cherrington Enterprises‘ beach cleaning equipment is getting a workout on the Gulf Coast. The company got its initial order from BP for beach cleaning gear shortly after the Deepwater Horizon accident on April 20.

“Cherrington is normally just a supplier of equipment, but due to the urgency of the need to begin the cleanup effort, the company was asked to provide operators, as well, for eight of our beach cleaners in the Grand Isle, La., area,” said Terry Iten, the company’s sales and marketing administrator.

The company recruited several of its staff from its manufacturing plant in Clarissa, Minn., and its corporate offices in Jamestown, N.D., to begin the cleanup operation.

Cherrington is the exclusive manufacturer of the mobile oscillating sifting method of beach sand screening, which thoroughly removes tar balls and slab oil from beaches. The company offers self-propelled and tractor-pulled beach cleaner models. Both types have the same sifting method and allow for sand screening or the complete removal of the contaminated sand.

“Cherrington beach cleaners have infinite hydraulically controlled depth-setting ability to precisely set the depth of screening. This allows the machines to work just the top ½- to ¾-inch-level of the beach to minimize the negative impact on naturally pristine beaches,” Iten said. “The self-propelled models are of a three-wheel design with high flotation tires and zero turn ability. This design and method are far more effective than the alternative use of heavy construction equipment for the remediation of the sand.”

The Gulf spill has brought new business Cherrington’s way, said Mike McPherson, president of the company. “We are ramping up production and out-sourcing (production of) component parts. We estimate that we will sell over 100 machines as a result of this oil leak,” McPherson told Govpro.com.

The cleanup process is quite dynamic, McPherson said. “I want to be complete and accurate with my information, but understand that things are changing daily here. Overall, I see improvements in the communication and distribution of contracts, and I have to give BP a little credit for those changes.”

Besides removing oil from the Gulf shores, Cherrington’s cleaners are at work on beaches in Hawaii, on coastal and lake beaches from California to New England, and from Washington to Florida.

A statement from the company said: “Cherrington is proud to be a part of the extensive effort of the Coast Guard, EPA, state environmental protection agencies, National Guard units, and the many dedicated contractors who are making exceptional efforts in 90+ degrees Fahrenheit and humid conditions to prevent additional oil spill damage and to cleanup the oil spilling into the Gulf of Mexico.”

A major boating manufacturer, SeaArk Marine is gearing up production as a result of the Deepwater Horizon incident. Supplies, such as oil-absorbent booms, are also at work in the Gulf spill. Government officials near the spill are clamoring for beach cleaning equipment.