The U.S. Supreme Court has overturned Chicago's ban on handguns, two years after the court's ruling that ended a similar gun ban in Washington. 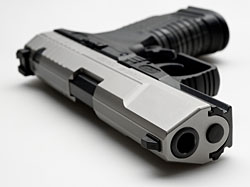 The U.S. Supreme Court has overturned a lower federal court’s ruling that upheld Chicago’s ban on handguns, essentially ending the ban. The new ruling comes in a lawsuit that was inspired by the court’s decision two years ago in District of Columbia v. Heller, which ended a similar gun ban in Washington.

In the latest case, McDonald v. Chicago, a group of Chicago residents filed suit claiming that the city’s gun ban violated their constitutional rights and hindered their ability to defend themselves against criminals, a similar argument to the one held in D.C. v. Heller. The 7th Circuit Court of Appeals originally upheld the city’s ban, but today’s decision will send the case back to the 7th Circuit, which is expected to overturn the city’s ordinance.

As in the Washington case, the Supreme Court maintained that the Second and Fourteenth Amendments protect United States citizens’ “right, recognized in Heller, to keep and bear arms for the purpose of self-defense.” “Self-defense is a basic right, recognized by many legal systems from ancient times to the present, and the Heller [decision] held that individual self-defense is ‘the central component’ of the Second Amendment right,” Justice Samuel Alito wrote in the decision. “Explaining that ‘the need for defense of self, family, and property is most acute’ in the home, the court found that this right applies to handguns because they are “the most preferred firearm in the nation to ‘keep’ and use for protection of one’s home and family.”

The court maintained that local jurisdictions have a right to preserve some “reasonable” gun control measures currently in place. Also, Chicago Mayor Richard Daley said during a press conference that, because today’s Supreme Court decision did not directly overturn the city’s ordinance, the statute remains in effect until the 7th Circuit rules on it. Daley said he is disappointed but not surprised at today’s ruling. “Across the country, cities are struggling with how to address this issue,” Daley said. “Common sense tells you we need fewer guns on the street, not more guns. So, we’re working to rewrite our ordinance in a reasonable and responsible way to protect Second Amendment rights and protect Chicagoans from gun violence. We’ll publicly propose our new ordinance soon.”

On June 18, a Chicago City Council committee conducted a hearing to address the crafting of a new city gun ordinance, according to Daley. During the hearing, many experts and members of the community testified that, if handguns are going to be allowed in homes, the city needs to put in place the strictest laws possible with regard to who is eligible to own a gun.

Daley also emphasized that he remains determined to continue Chicago’s and the nation’s fight against gun violence in all its forms, including handguns. “Gun violence is not just a Chicago problem, it is an American problem. And, it will continue until we understand that there are reasonable and responsible steps we can take as a nation to help end the needless gun violence that irresponsible people bring on our friends and family,” Daley said.