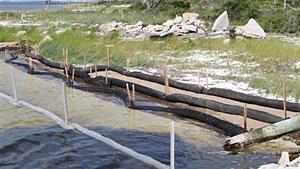 Oil-absorbent booms made from a 3,000-year-old Egyptian hibiscus plant called kenaf are containing the Deepwater Horizon oil spill throughout the Gulf of Mexico.

Oil-absorbent booms made from a 3,000-year-old Egyptian hibiscus plant called kenaf are containing the Deepwater Horizon oil spill throughout the Gulf of Mexico. In addition to containing the oil, the booms serve as a barrier that keeps oil off boats, docks and pilings. 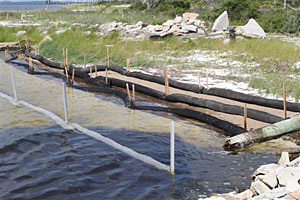 ErosionTech, a Juliette, Ga.-based company that developed the product, has deployed 26,000 linear feet of kenaf boom in waters near Grande Lagoon Yacht Club in Escambia County, Fla., in wetlands near Houma, La., and at Orange Beach, Ala.

“We are going through a grassroots phase, that involves product demonstrations and testing,” said Josh Still, ErosionTech’s vice president of sales. “We anticipate that after the U.S. Coast Guard and BP tests it, and after municipalities try out the product, that we’ll then start to receive orders. Right now we are just ramping up production.”

The company currently has 40 employees at its 437,000-square-foot Juliette, Ga., facility. Still said the company has added more than a dozen staffers since the start of the Gulf spill and will continue to grow its work force. “If the product takes off, we will need to add to our production capacity and expand our work force,” Still told Govpro.com.

By this fall, ErosionTech could have as much as 90 million pounds of kenaf available for Gulf oil spill boom and oil absorbent blanket production.

The containment system that ErosionTech is using on the Gulf relies on kenaf blankets and booms that ensnare tarballs and oil. Crews remove and replace oil-saturated boom sections as needed. According to news reports, plans are under way to squeeze the oil from the fiber and make fuel pellets that could be burned in power plants as a substitute fuel supply.

“Kenaf is an environmentally friendly, biodegradable natural plant material that actually performs on the level of synthetically engineered fibers,” Still said. The company’s fiber source is Biotech Mills, which is a grower and processor in Snow Hill, N.C.

Still told Govpro.com that kenaf, a renewable plant fiber, offers the strength and absorption capabilities of synthetic fibers, and that it is suited for many erosion-control tasks.

“The next market we are launching it into is the erosion-control industry because of the new environmental regulations, including the phase 2 environmental compliance test that the U.S. EPA has set forth,” Still said. He added that state and local government highway and road departments and government contractors currently buy his firm’s kenaf booms.