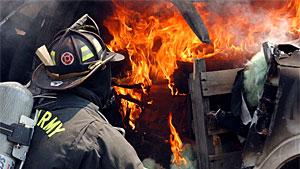 Earlier this year, we reported that the number of law enforcement officers who died in the line of duty in 2009 was the lowest in 50 years. Now comes word that, for the first time in three years, the number of on-the-job firefighter deaths in the United States has dropped below 100.

Earlier this year, we reported that the number of law enforcement officers who died in the line of duty in 2009 was the lowest in 50 years. 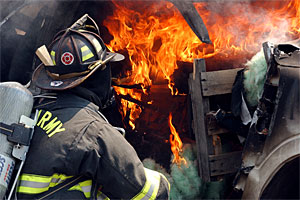 Now comes word that, for the first time in three years, the number of on-the-job firefighter deaths in the United States has dropped below 100. Eighty-two firefighters were killed in the line of duty last year, according to the National Fire Protection Association’s (NFPA) annual “Firefighter Fatality Report.”

The number of firefighter deaths last year is much lower than the 10-year average of 98 and down even more from the 105 killed in 2008. The 2009 count is the lowest annual total since NFPA recorded 79 deaths in 1993 and the third lowest total since NFPA began the study in 1977.

“While a drop over one year certainly isn’t enough to show a trend, it is definitely encouraging to see the number of firefighter fatalities drop well below that 10-year average,” said Rita Fahy, NFPA’s manager of fire databases and systems. “We are hopeful that we will continue to see fewer and fewer firefighter fatalities over the next 10 years.”

Each year, NFPA collects data on all firefighter fatalities in the U.S. that resulted from injuries or illnesses that occurred while the victims were on duty. The report offers a snapshot of the risks that U.S. firefighters face.

As in most years, the No. 1 cause of on-duty firefighter fatalities was sudden cardiac death. While the number of such deaths has been trending downward since the late 1970s, sudden cardiac death still accounted for 39 percent of the on-duty deaths in the last five years, and 42 percent in 2009 alone, underscoring the need for wellness-fitness programs and health screenings for U.S. firefighters.

In 2009, there were nine firefighter deaths in vehicle crashes, a sizable decline in the category that regularly accounts for the second largest share of deaths. That is the lowest total since 1983, when there were six, according to NFPA. Over the past 10 years, the number of deaths in road vehicle crashes has averaged 15 a year.

A parallel with police?

Similarly, traffic incidents claimed 56 police officers’ lives in 2009. That figure was down from 71, or a 21 percent decline, in 2008, according to preliminary statistics from the Washington-based National Law Enforcement Officers Memorial Fund (NLEOMF). The fund, a non-profit group, reported that 125 law enforcement officers died in the line of duty in 2009, down 6 percent from last year and the lowest number since 1959.

In July, the U.S. Fire Administration will issue its final 2009 tabulation of the number of firefighters killed in the line of duty.