Measuring the green in greenspace 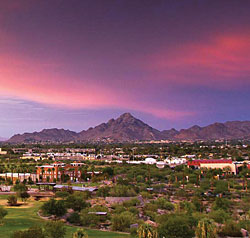 While the Washington-based U.S. Green Building Council’s (USGBC) Leadership in Energy and Environmental Design (LEED) Green Building Rating System has become an influential standard for green buildings, there has not been — until now — a similar way to recognize sustainable landscaping. In November 2009, the Sustainable Sites Initiative (SITES), a partnership between the Washington-based American Society of Landscape Architects (ASLA), the Lady Bird Johnson Wildflower Center at the University of Texas in Austin, Texas, and the United States Botanic Garden in Washington, announced the release of the nation’s first rating system for the creation and maintenance of sustainable landscapes.

The creators believe that if the SITES rating system proves successful, it will likely have significant impact on the design and development of the nation’s public and private open spaces, parks and recreation areas. USGBC, a stakeholder in the initiative, anticipates incorporating the guidelines and performance benchmarks into future iterations of LEED. “Landscapes have the potential to actually give back; to provide a whole host of ecosystem services, such as clean air, clean water, ozone reduction, carbon sequestration and human health improvement,” says Steve Windhager, SITES director and director of landscape restoration at the Lady Bird Johnson Wildflower Center. “There is potential to make things better than they are…not just lessen the damage.”

Over the next two years, the rating system will be tested using 175 public and private projects throughout the U.S. The results will be used to form evaluations, identify problems and make adjustments to the rating system. Included in the pilot phase are 42 parks, recreation facilities and nature preserves. “The rating system represents a recognition of value that landscapes play in terms of achieving sustainability,” Windhager says. “SITES focuses on how landscapes can be productive and gives credit for designing, creating and maintaining them in such a way that you actually provide greater ecosystem services.”

SITES describes the metrics for measuring landscape sustainability in the 233-page report, “Guidelines and Performance Benchmarks 2009.” The rating system calls for a comprehensive evaluation of a site, including soils, vegetation, recycling of materials and construction methods. “Until you are able to explain the goals you want to achieve in concrete terms, it’s impossible to achieve them. The rating system helps to set those goals in very specific, discrete and measurable ways,” Windhager says.

The rating system could increase public understanding of the value of public parks and recreation areas for long-term community sustainability, says Nancy Somerville, ASLA’s executive vice president and CEO. “The SITES rating system should lead to a greater understanding of the value of parks and recreation areas because of the critical roles those landscapes play in the ecosystem and their positive impact on health and welfare,” Somerville says. “And, placing a higher value on these landscapes should lead to greater investment.”

The initiative’s partners believe that greater investment in well-planned greenspace is necessary for the long-term well being of communities. “Sustainability should be at the forefront of all decision-making that relates to parks, open spaces and public lands,” Somerville says. “The focus on public health and the obesity crisis have led to greater recognition of the need for walkable communities and access to parks and recreation opportunities. It will take some time, but the economic models will evolve.”

Early in the development process, the rating system was met with some skepticism, but creators say that there was and has been — overall — overwhelming support in the design community, and among elected officials. “There is a willingness, and acceptance and even desire to measure the performance of techniques that are employed to make their landscapes sustainable…with the added advantage of reducing costs and providing environmental benefits,” says Rich Dolesh, chief public policy officer for the National Recreation and Park Association. “The simple realities of shrinking budgets and general economic conditions dictate that we have to reduce the cost of energy consumption and live more sustainably.”

José Almiñana, a landscape architect and ASLA representative for the SITES steering committee, agrees. “We are moving away from an oil economy to a carbon economy…an element we need to pay attention to for the future of life on the planet,” he says. “Carbon markets will develop themselves and it will be a different economy, and landscapes will have significant value. Parks will be seen as tremendously valuable greening structures for cities.”

In early 2010, SITES issued an open call for pilot projects — any type of designed landscape, public or private, at least 2,000 square feet was eligible — and received 345 submissions. According to Dolesh, that was two or three times the expected amount.

The steering committee assumed from the start that public lands owners — especially parks and recreation agencies — would be prime candidates to use the rating system, says Dolesh, who has served on the initiative’s steering committee since its inception in 2006. “There is a keen interest on the part of many who want to demonstrate that they are managing their lands sustainably,” he says.

When choosing pilots, the selection committee looked for innovative project leaders, as well as sites in various stages of development that would test every proposed element. “This is where the rubber meets the road,” Windhager says.

The Philadelphia Department of Parks and Recreation is using the system to plan Hawthorne Park, a small site on just under one acre that will serve as a passive community gathering place and potential outdoor amphitheatre. Plans include 6,000 square feet of permeable pavement and a high-efficiency irrigation system.

Raleigh, N.C., is using the guidelines to make additions to Horseshoe Farm Park while preserving it in as natural a state as possible. The city will add restroom facilities that will be self-managed on the property, and any electricity would be self-produced. Plans also call for increasing accessibility, including adding a connection point to a 26-mile greenway. “It’s nice to see a sustainability initiative that’s completely landscape-focused,” says Steve Bentley, senior park planner for Raleigh Parks & Recreation.

New Orleans is embarking on a massive redevelopment of City Park, a 1,300-acre regional park property, which suffered $43 million in damage from Hurricane Katrina. City Park is planning a Festival and Recreation Complex with athletic fields, trails, a reunion shelter, and an electronic distribution system to support community events. “We see this as an opportunity to set a standard for New Orleans to rebuild in a more environmentally friendly way,” says City Park Construction Manager Meg Adams. “In addition, we intend to use the principals we incorporate as an educational tool for the public.”

Cleveland Metroparks has similar plans for its West Creek Reservation project, a roughly 300-acre property that, according to Patty Stevens, chief of park planning, is intended to serve as a center for “ecological restoration of urban wild land.” Interpretive exhibits will describe the sustainable features of the site and facilities.

At the end of the day, Windhager hopes SITES will change the status quo, so that the landscape is valued as a functional component of the building movement. “We want to move the landscape from being something that is not only attractive, but really makes our world a more sustainable place,” Windhager says.