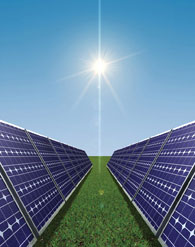 Solar power projects can add value to existing municipal buildings and landfills, improve local air quality and create green jobs. Although some local governments have the expertise and resources to create financial incentives, finance private solar projects, retrofit buildings, or develop their own solar power projects, many do not have the same capabilities. However, there are some low-risk and low-cost, entry-level steps that many cities and counties can take to create environments that encourage the development of solar power.

Solar power constitutes a small amount of the renewable energy generated in the United States, but its use is growing, aided by state and federal financial incentives, solar power purchases by public and private utility power authorities, state renewable portfolio standards and energy efficiency goals, efforts to increase diversity of energy sources, and technical assistance programs for local governments and consumers. The 2009 stimulus package includes $16.8 billion for the U.S. Department of Energy Office of Energy Efficiency and Renewable Energy’s programs and initiatives, of which $117.6 million is allocated for the agency’s solar program. In addition, 45 states, the District of Columbia, Puerto Rico and the U.S. Virgin Islands offer financial incentives to use solar photovoltaic (PV) panels.

As a result, investments in the industry are significant, even in Northeastern states, which receive fewer kilowatt hours of solar radiation per square meter. For example, in January 2010, the New York State Energy Research and Development Authority, which administers New York’s recovery act programs, announced an additional $10 million in federal stimulus funding for the installation of solar PV systems.

Steps Locals Can Take as Land Use Regulators

Many local officials think of solar panels as providing power to their buildings. However, local governments can take several steps to increase the number of privately developed solar projects by clarifying land use requirements, creating host sites that are attractive to solar power developers and promoting solar power development. For example, many municipalities have changed solar energy zoning codes, which have defined conditions for new solar projects and whether variances will be needed. The following are areas in which some local governments have changed regulations to encourage solar energy development.

Use restrictions. Zoning codes should specify in which districts solar energy is permitted. Ithaca, N.Y.’s zoning code, for example, provides that rooftop, building-mounted, ground-mounted and freestanding solar collectors are permitted in all zoning districts, subject to setback requirements and height limits. Zoning codes also can exempt solar projects from needing a variance for a utility use in certain zones or at landfill sites. Seattle authorizes solar collectors that increase an existing nonconforming use.

Height limits. Zoning codes also should specify whether solar panels must be installed within building height limits, whether those panels are mounted on rooftops or on the ground. Oyster Bay, N.Y., for example, lists solar panels along with antennas, chimneys, cupolas and the like in its height limit exception, allowing an extra 10 feet in residential districts and 15 feet in nonresidential districts, and excludes solar panels from the limit of 10 percent roof coverage that applies to other height exceptions. Roseville, Calif., in contrast, requires solar panels in residential zones to be within building height limits, “in a manner that does not detract from the surrounding neighborhood and preserves the residential nature of the house” such as “close to parallel to the pitch of the roof and in close proximity to the roofing material.”

Lot coverage limits. Zoning codes also should specify whether solar collectors may be located in front and side yards, and establish setback requirements.

Installation or decommissioning requirements. When the local government has additional requirements, specifying them in the zoning code will help developers design projects more likely to gain prompt approval. For example, Ithaca requires installation by qualified solar installers, inspection of electrical and public utility grid connections, storage of solar batteries in secure containers and removal of solar collectors that have been non-operational for 12 months.

Expedited permitting review. Solar energy installation safety issues, such as loading, wind shear and fire safety, are evaluated when either the building or electrical system are permitted and inspected. There are several models for standardized and expedited review of small residential projects such as those from the Solar America Board for Codes and Standards. Clarification of building and electrical permit application requirements and streamlining departmental reviews for larger solar projects will reduce costs and allow developers to anticipate project time lines more effectively.

Building codes. Green building codes also can ease the way for solar power. In February 2010, a New York City task force issued a comprehensive set of recommendations for a green building code. The report suggested detailed criteria for attaching solar panels to buildings; inclusion of solar power in an exemption allowing mechanical equipment on roofs and permitting solar panels to be visible from the street in historic districts without review by the city’s Landmarks Preservation Commission.

Cities and counties also can promote their own sites to private developers of solar energy projects. Landfills, buildings and parking lots provide open, flat spaces that can be well-suited for solar projects.

By leasing government property to a third-party developer, local governments that do not have the expertise to select appropriate sites, types of panels, and combination of financial incentives can gain experience with solar power, and raise the profile of solar power in their communities, without taking on significant expense and risk.

Landfills, in particular, are well suited to solar power generation and are a good use for contaminated and otherwise unproductive sites. Landfills generating methane extracted for power generation will have grid interconnections, and solar modules can have footings that do not pierce the landfill cap.

A city or county closing a landfill can avoid having to revisit the cap design, remediation plan, final determination, closure conditions and financial assurances that would be required for a solar project by coordinating with state regulators with jurisdiction over the closure plans to include provisions for future solar or renewable energy. In states where environmental review is required for approvals of public and private projects, local governments also should encourage state environmental protection agencies to consider a comprehensive programmatic review of solar development on landfills, as the federal government has done for western federal lands, or prepare an inventory of state-tracked sites to be incorporated in or supplement databases of federal lands and federally tracked sites suitable for renewable energy development.

The number of landfill-based solar projects is growing. The New Jersey Meadowlands Commission is spending $8.5 million in federal stimulus funds to build a 5-megawatt solar landfill project. Florida Power and Light created a 250-kilowatt solar panel array and public park on a closed site in eastern Sarasota County. Other ground-mounted solar projects on contaminated lands and landfills have been installed in Brockton, Mass., and Nellis Air Force Base in Nevada. Developers also have announced plans for similar projects in North Carolina and in Bucks County, Pa.

Some local government buildings and parking lots can be large enough to make solar projects economically viable. They should have interconnection and transmission access, and should not raise concerns about contamination or how they affect historic, scenic or cultural resources. As a result, the site owner and developer will not need to agree on complicated insurance or liability issues, and environmental review can be fairly simple.

Creating an inventory of potential sites can be a part of or a precursor to a broader sustainability plan, such as the one found in El Paso, Texas, or in New York City (PlaNYC). Several states, including Massachusetts and Wisconsin, handle the planning for a group of local governments. (For information on creating a comprehensive sustainability plan, visit the Department of Energy’s Technical Assistance Program series for a recent Webcast on the topic at http://apps1.eere.energy.gov/wip/tap_webinar_20100127.cfm).

There are important steps that local governments can take to position their cities, towns and villages to take advantage of the financial incentives for solar energy development. By clarifying their land use requirements and identifying suitable sites, local governments can promote solar projects and help meet their renewable energy goals.

Judith Wallace (wallace@clm.com) is an attorney in the Environmental Practice Group at Carter Ledyard & Milburn LLP, in New York City, and works with public and private sector clients on licensing, environmental review, and challenges to renewable and conventional energy projects. She represented the Long Island Power Authority in connection with the solar project.