The "Senior Zones" in Hillsborough County, Fla., was one of 11 winners of the 2009 America's Crown Communities excellence awards. 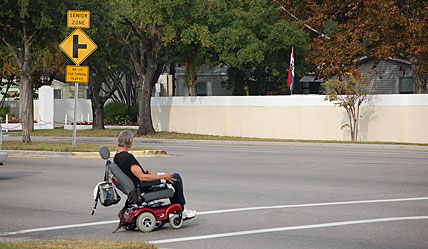 Faced with an alarming number of traffic accidents involving senior pedestrians around two retirement communities, Hillsborough County, Fla., officials borrowed a technique used to keep residents on the other end of the age spectrum — school children — safe while crossing busy streets near schools. The county created “Senior Zones” around the two communities that used traffic calming devices, such as flashing traffic signs and crosswalk improvements, to significantly reduce the number of fatalities and injuries from accidents within the zones.

In 2006, there were 68 accidents with 24 injuries on Fletcher Avenue, and 18 injuries and two deaths from accidents on nearby Waters Avenue. The accidents occurred within a three-block area in which the Rocky Creek Village and John Knox Village retirement communities are located.

John Knox Village had been requesting a traffic light for its entrance on Fletcher Avenue since 1989, but the county’s Public Works Traffic Services Division’s engineering studies found a new traffic signal was not warranted. The county proposed the Senior Zone project to address the problem instead.

The causes of the accidents included vehicular speeding, the poor eyesight and slow reaction time of seniors involved in the accidents, and a lack of warning to drivers that a large percentage of residents in the area are elderly. Along with marking the crosswalks with “Senior Zone” signs and making other improvements to the intersections, the county adjusted the traffic signal timing to decrease the speed at which pedestrians are expected to cross the street, from 3.4 feet per second to 2.8 feet per second.

Other improvements include a “pedestrian-sensing camera” that activates a crosswalk after detecting pedestrians in the area, larger lettering on street signs and larger-than normal-pavement markings for senior drivers, and electric signs to advise drivers of their speed.

Since the Senior Zones’ creation, accidents have decreased 47.1 percent in the Fletcher Avenue Zone and 37 percent in the Waters Avenue Zone. The average speed of traffic on Waters Avenue has been reduced by 9 mph, and speeds on Fletcher Avenue have gone down by 4 mph. Also, there have been no fatal accidents in the areas since the deaths in 2006.

Date completed: May 2007 and ongoing