Building deconstruction delivers benefits to governments and the environment

More governments are looking to building deconstruction and salvage and reuse of building materials from obsolete structures as they update and upgrade their communities' building stock. 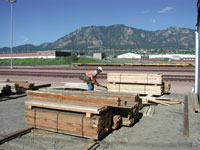 A good number of government-owned buildings are showing their age and may need repairs or replacement. The Energy Information Administration’s latest “Commercial Buildings Energy Consumption Survey (CBECS): Building Characteristics Tables” estimate that 25,000 of the 635,000 government-owned buildings in the United States were constructed before 1920 while 67,000 were built between 1920 and 1945. A whopping 99,000, meanwhile, were constructed between 1946 and 1959 &mdash; the youngest in that last batch would be 50 years old.

More governments are looking to building deconstruction and salvage and reuse of building materials from obsolete structures as they update and upgrade their communities’ building stock. In Cleveland, Ohio, the city government approved the deconstruction of two abandoned homes in the Glenville neighborhood. Crews salvaged wood, bricks, copper pipes, glass blocks and doors for construction, renovation or whole new uses, such as ornaments or furniture. A spokesperson for Urban Lumberjacks of Cleveland, which handled some of the deconstruction, estimated that the salvaged materials would fetch about $5,000 in the marketplace.

Cleveland’s city hall and the Cleveland Foundation split the costs of the deconstruction work. The city’s tab just about equaled the price of normal demolitions. As part of the project, deconstruction crews included former prisoners and other workers in need of new skills.

Cleveland’s demolition manager, Damian Borkowski, said he would be studying the project’s results more carefully before committing to more deconstruction. Still, he says, “this is definitely a direction we want to go.”

In the Windy City, meanwhile, city officials see the value of deconstruction. “We are very enthusiastic about the opportunities that deconstruction represents for the city, both for deconstructing city facilities, but also for engaging the private sector to deconstruct buildings,” Sadhu Johnston, Chicago Mayor Richard Daley’s deputy chief of staff, told GovPro.com.

Johnston added: “We believe that deconstruction helps to keep a significant amount of material out of the landfill while employing people and providing a source of cheap building materials for Chicagoans rehabbing their homes or businesses.

“Under Mayor Daley’s leadership, we have been working to reduce the amount of construction and demolition materials entering the landfills. Several years ago, we passed an ordinance mandating 50 percent recycling at larger construction and demolition sites. We’re happy to say that it’s working, and people are recycling these materials; in some cases they are starting new businesses to do so.”

Other government agencies are getting involved, said Thomas Napier, research architect at the Construction Engineering Research Laboratory, U.S. Army Corps of Engineers, Engineer Research and Development Center, in Champaign, Ill. “At the federal level, federal agencies are required to reduce construction and demolition waste by a minimum of 50 percent,” Napier told GovPro.com. “Federal agencies have developed their own guidance to implement these directives. California has a similar state ordinance, as do some municipalities.”

“Governmental entities should consider a ‘full cost accounting’ approach to removing buildings. In addition to waste generated by landfilling existing materials, there are significant environmental stressors created by manufacturing new building materials. It’s difficult to place a dollar value on greenhouse gas or carbon footprint. But these stressors do have a cost. Someday these costs will be incorporated into economic analyses, and the benefits of reusing existing materials will be clear in the long view.