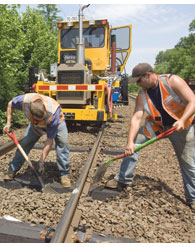 The need for infrastructure repair continues to grow even as many traditional sources of revenue continue to shrink. New bond programs created by the American Recovery and Reinvestment Act (ARRA) could help keep the projects moving.

Build America Bonds (BABs) are taxable bonds that state and local governments can issue and then be reimbursed by the Treasury Department for 35 percent of their borrowing costs. With the reimbursement, governments’ borrowing costs for BABs are lower than for typical tax-exempt bonds, saving governments money and opening up access to the conventional corporate debt markets.

In April, the New York Metropolitan Transit Authority (MTA) issued $750 million in BABs to finance transit and commuter capital projects operated by MTA’s affiliates and subsidiaries. While investors who buy the bonds receive 7.336 percent interest, the 35 percent federal subsidy allows the MTA to only pay 4.768 percent interest on the bonds. The MTA was able to use BABs for most, if not all, of its borrowing for the remainder of the year, says MTA Chief Financial Officer Gary Dellaverson. “This is important because it will take away much of the uncertainty of the MTA’s debt service budget, and also provide cost savings,” he says

ARRA also included $10 billion for Recovery Zone Economic Development Bonds, a type of taxable BAB that will reimburse 45 percent of state and local governments’ issuance costs, but must fund projects within a predefined area of the issuing community. The money can be used for public infrastructure development, job training and educational programs. The Treasury Department has capped the bond volume allocations for counties and large cities based on 2008 employment declines.

In June, New Castle County, Del., received a $50 million allocation for Recovery Zone Economic Development Bonds, which it plans to use primarily to finance sewer and stormwater infrastructure projects, says Karl Kalbacher, the county’s director of economic redevelopment. “We have a list of over $100 million worth of projects that could make use of these funds,” he says.

Guidance on the new bonds is available at www.irs.gov.