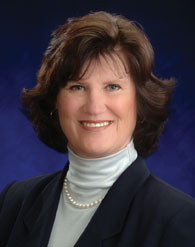 This month, Sonoma County, Calif., Supervisor Valerie Brown will be sworn in as the new president of the Washington-based National Association of Counties (NACo). Among her many activities as president, Brown plans to focus attention on healthcare reform. American City & County spoke with Brown about NACo’s approach to healthcare and how the association can help its members weather the recession.

Q: What recommendations has NACo made to the administration on healthcare?

A: We’ve always believed that the more people that you can provide healthcare to, the less impact there will be on emergency rooms in your county hospitals or private hospitals. We are moving toward prevention and wellness, which means that we believe that people ought to have access to doctors when they are trying to stay well, not necessarily just when they get sick.

Q: Both of your goals, healthcare and green government, require a strong federal/local partnership. What will you do to help improve the partnership between federal and county governments?

A: When the [Obama] administration decided to move into this American Recovery Act mode and to provide transparency, they invited us as leaders of associations, be they cities or counties or mayors or whatever, to come to the White House to be briefed by every single department head as to their direction [for] the recovery act. What we realized is that, in a lot of cases, some departments have dealt directly with states, and not with local governments. So they needed to know how local governments responded, and how local governments accessed funds, and what local governments did to provide some kind of responsible monitoring of those funds. We have developed, over the past three months, this give-and-take of communication that I think has schooled [federal officials] better about local governments.

At our annual conference in July, we are highlighting that once again. We have workshops and educational seminars. We have speakers that will be available. We have forums that will be set up so that our elected officials can actually go in and talk to folks about what makes sense and how we can make this [partnership] work better.

A: I think that one of the values of NACo is that we have 2,400 plus counties that are members that are actively involved. We have networks that are poised and ready at any time to lobby for the interests that we have, and I think that that strong voice is what will carry us through, because I think each of us in our own counties recognize that, if we were just doing this by ourselves, we would be left outside the game. But, given the fact that we have the power of all the counties working together, I think that it has put us in a valued position. If you’re from a county of 1,200 or 10,000, the likelihood of you having federal representation is probably pretty small. When we all join together, [smaller counties get] the same representation that [Los Angeles] has or that Atlanta has.