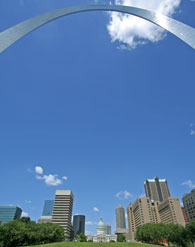 The state best known for its Gateway Arch has become a model for intelligent building planning, monitoring and energy management. In 2005, Missouri leaders embarked on an aggressive campaign to reduce statewide energy consumption by 15 percent by 2010. While constituents praise the campaign as environmentally friendly, the state’s motivations also were driven by economics.

With hundreds of state-owned buildings and a sprawling 32 million square feet to manage, Missouri’s operations and maintenance bills were hitting $300 million annually. At the same time, the deferred maintenance logs were getting longer, and the budgets were getting smaller.

Knowing something had to be done to better manage their properties, state officials decided to upgrade the facilities’ control and information management systems — which had operated separately — into a shared building information management system. The state hired Milwaukee-based Johnson Controls to lead a group of companies, including ISCO International, Talisen Technologies, GridLogix (which was acquired by Johnson Controls in 2008) and Appian to deliver the plan.

The result was a system that would manage all facility subsystems for more than 1,000 buildings through a single portal at one location, using device networking technology and system integration. All building systems, from heating and cooling to security and lighting, would be integrated with other applications, such as IT/communications and business process management.

Using the new system, managers could view detailed information on a particular site, facility or function, such as energy consumption. Data and control information would flow through many software applications and Internet-enabled devices that are connected through secure communications to a user portal.

INTEGRATION OF PRODUCTS, VENDORS AND BUILDINGS

In early 2007, the $24 million project began. The overall scope of the project was to implement devices and systems that would allow for a much higher level of monitoring, measurement, management, verification, communication and interoperability across all state buildings. First, state leaders and the technology solutions team needed to understand how much energy was being used and collect information about existing expenses and resources.

The first phase included a facilities assessment and an initiative to pull together data from the state’s:

A complete building information management system was created for the state’s facilities department, including a dashboard of information about buildings’ operating costs, capital spending and energy spending. The system, dubbed the Enterprise Sustainability Manager, integrates technologies for a high level of connectivity between a variety of products from different manufacturers. Also, it can integrate future technologies.

Of course, the enterprise-wide project of such large magnitude did not happen all at once. The technologies were introduced over two years, and as the level of integration across the various technologies increased, a bank of information emerged on how the new system was performing. Starting with the implementation of a software platform to provide facility condition and space planning information, the state was able to rationalize its space requirements and justify the energy savings retrofit program with data on the condition of its major energy-consuming infrastructure.

The building automation system greatly improved the interaction of mechanical subsystems in the buildings and led to optimum energy consumption, cost-effective building operations and improved occupant comfort. The heart of the energy retrofit program is an integrated system that delivers real-time information on water, gas and electric utility usage, maintenance spending, capital investments and more.

As a result, the state now has all the information it needs to measure and verify the savings that were guaranteed by the overall project. That not only reduces typical measurement and verification costs, but also provides state officials with the information necessary to ensure that long-term energy, capital, real estate and maintenance costs remain under control and within budget.

Missouri’s efficiency makeover is one of the most comprehensive in the nation in terms of scope, size, depth, and results, which include:

Annual reductions in the carbon footprint include:

Through automation, the Show Me State’s intelligent building infrastructure reduces energy use through efficient facility management. Missouri’s measurable success is showing other leaders in the public and private sectors that energy efficiency has never been more important, tangible or successful.