Government employee benefits are becoming a casualty of the nation's economic battles. 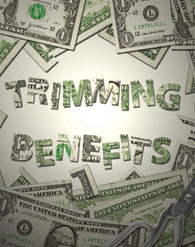 As a Los Angeles social worker, David Green knows that times are tough, not only for the city’s most vulnerable residents, but also for himself and his fellow workers who are facing difficult choices as a result of disastrous revenue shortfalls. “The general climate is, ‘Brace yourself,’” Green says.

With the city facing close to a half-billion-dollar gap in the current fiscal year and another $1 billion deficit for the next fiscal year, Mayor Antonio Villaraigosa has asked city unions to renegotiate their contracts to forestall widespread layoffs. “The message we get is that we’re lucky to have a job,” Green says, and he should know. In addition to being a social worker, Green is on the executive board of the Service Employees International Union Local 721, which represents health services and social workers throughout the Southern California region. “All over the area, we are seeing wages and benefits cut back and watered down, unfortunately.”

The threat to the status quo in benefits (or mandatory furloughs as an alternative) confronting employees in California is repeated across the country, as local and state governments struggle with the effects on their budgets of the worst economic crisis since the Great Depression. At a time when demand for essential services for the neediest is rising, the revenues from income and property taxes are in free fall.

Employees across the spectrum of the public sector — large cities, small towns and state governments — are feeling the bite of the economic retrenchment. In Kane County, Ill., a task force is considering reducing health care benefits, imposing unpaid days off and unpaid holidays to plug a $3.9 million hole in its budget. In Ohio, some unionized state employees will take unpaid furlough days to save the state $440 million over two years. In the third year, workers will get most of the money back. In Connecticut, the state legislature approved a $700 million package of wage and benefit concessions to help close a budget gap projected at $8.7 billion over two fiscal years. New York Mayor Michael Bloomberg has asked city employees to pay for some of their healthcare costs as an alternative to widespread layoffs.

“The budget squeeze has led elected officials to look at fringe benefits costs, which have been growing while revenue has been falling,” says Charles Brecher, research director of the Citizens Budget Commission, a New York City-focused fiscal watchdog group. “It’s attracted their attention.”

With the economic toll touching all corners of the nation, many public officials are faced with the prospect of massive layoffs to meet the requirements of mandatory balanced budgets. But not all. Communities with strong economies because of their industry mix or governments that took preemptive action several years ago are faring better.

A recent survey conducted by the Brookfield, Wis.-based International Foundation of Employee Benefit Plans (IFEBP) shows that public employer perceptions of benefits is “joining the same bandwagon” as the private sector, says Sally Natchek, senior director of research. In particular, public employers are moving more toward cost sharing (e.g., coinsurance, co-pays, deductibles) as opposed to the traditional employer-pay-all plan. “The corporate sector has already done this, increasing cost sharing,” Natchek says. “The public sector has delayed cost-sharing plans, but now is picking up on it.”

The IFEBP evidence indicates that the hard economic times have affected the attitudes of employers toward changes in employee benefit plans. In a 2008 survey, 62.5 percent of public employers said they were planning to increase employee cost sharing. In IFEBP’s 2009 survey, 74 percent of public employers said they were considering greater cost-sharing, and 82 percent of them said their employees were concerned about the change in their benefit plans. Where public employers had lagged private employers in the first survey in implementing the changes (62.5 percent vs. 75.5 percent), they jumped ahead of private employers (72 percent vs. 70.5 percent) by 2009. “These changes are the most startling in the survey because the other [employer] sectors had already made the changes,” Natchek says.

The respondents’ answers to specific changes in plan design further illustrate how the nation’s financial crisis has changed the mindset of public sector employers. While the percentage of public and corporate employers that were planning to increase cost-sharing among employees was close to the same (about 70 percent), public employers (46 percent) were much more likely than private employers (35 percent) to cite the financial crisis as the reason. The trend is similar for planned increases in premiums (45 percent for public employers vs. 35 percent for corporate employers.)

“Even as late as last July, [when the first survey was undertaken], they were digging in their heels about making changes,” Natchek says. “Look at what happened. We have a financial crisis. Now they are doing what their brothers in the corporate sector have already done.”

In December 2008, the U.S. Bureau of Labor Statistics reported that public sector employees earned benefits worth an average of $13.38 an hour compared to $7.98 an hour for private sector employees. Overall, total compensation for state and local workers was $39.25 an hour — $11.90 more than employees in private business. In 2007, the gap in wages and benefits was $11.31. Labor costs account for about half of state and local spending, with benefits accounting for 34 percent of that total.

Critics of the compensation systems for public sector employees argue that their benefits packages are out of line with those offered in the private sector and unsustainable in today’s economy. “The old argument that benefits are better in the public sector because wages are less no longer holds,” says Brecher of the Citizens Budget Commission. “Wages are competitive, and fringes are more generous. It’s time to align benefits with the private sector. The combined wages and fringe benefits are more generous than they need to be to recruit a talented labor supply.”

But, Green says that the statistics are misleading, because the public sector work force includes many professionals who could be making more money in other lines of work. His own position involves placement of children in difficult family situations in suitable homes. “I never became a social worker to become rich,” says Green, who holds a master’s degree in his field. “I do this because I care about kids. I want to improve society through social work.

“But, I also want benefits,” he adds. “I want to be able to retire. When my children are sick, I want to be able to take them to the doctor. I’m not highly paid, and my job is very stressful. I don’t think many people appreciate the public sector worker.”

While the debate over the affordability of employee benefits in the public sector is an important subtext, the larger issue of meeting the current financial crisis remains the driving force for change in communities around the nation. Depending on the fiscal situation in any community, the call for changes in worker compensation can range from general outcry to nonexistent.

Glendale, Ariz, has imposed 13 days of mandatory furloughs, elimination of the tuition assistance program and a hiring freeze. In addition, employees are being forced to fund more of their own pension programs. “They’re initiating the standard moves,” says Ray Villanueva, a supervisor at the city’s water treatment utility.

Because income has fallen short of expectations, Villanueva says the city is looking at ways to cut costs, including the employee compensation package. “They are looking to get more from the workers and pay less,” he says. “There’s a big change in the equation.”

In Ontario, Calif., which might be seen as the epicenter of the financial crisis in hard-hit California, the city has been able to avoid benefit cuts and furloughs, though it is negotiating to eliminate cost-of-living increases, says Louis Abi-younes, the city engineer. He says the city of 175,000 has been working for two years, before the onset of the financial crisis, to eliminate unnecessary positions and trim costs throughout the public organization.

“We knew there was an economic slowdown coming four years ago, and I’m glad that we did not fill positions,” he says, noting that his own department has met the crisis without layoffs. “There are positions that we didn’t fill three-and-a-half years ago, but we have reallocated work like any other employer. We’ve moved people around, undergone cross training. We hope we’ll be able to survive any slowdown.”

Rolla, Mo., a city of 18,000, has avoided layoffs and benefit cuts, but has taken a sharp eye toward trimming costs, including those in the health-related expenses. “We’ve given our health plans stronger scrutiny,” City Administrator John Butz says. “We’re understanding ways to control costs.”

Butz says that his health plan had only given “lip service” to wellness programs in the past, but has taken a much more aggressive approach more recently, with employee emails, health assessments, weight-loss assistance and incentives and new arrangements with medical networks. As a result, the government workers’ usage has been reduced and there was no increase in the medical costs, while neighboring communities saw increases of 5 percent or 6 percent.

Butz says that Rolla’s benefit costs are about in the middle of the pack among the 12 cities it works with in its area municipal league. He is hoping that the economy improves sufficiently and that fuel prices remain well below the $4 level of the summer of 2008 so the city will not have to take drastic action. “We will go to layoffs if we have to,” he says. “But, we think we can avoid them.”

In central Ohio, the enormous difficulties of the automobile industry have severely affected a number of communities and their public sector labor forces, but not Concord Township. The reasons, says Trustee Robert Shook, are that the community has been able to attract economic development, has received a huge boost to a local military facility and has worked with other municipalities to pool labor forces.

“We contract out a lot of services, so we have low fixed costs and overhead,” Shook says. The township only has a full-time road superintendent and assistant and five part-time employees, so employee benefits are not a major concern. “We have been able to control costs by cost-sharing,” he says.

Although the impact of the benefit squeeze on employees varies throughout the nation and depends on local conditions, there is no doubt that benefits are coming under increased scrutiny. Shook says he is aware of the severe financial straits of many communities surrounding Concord Township, including Lorraine, where 5,000 high-paying jobs were recently lost.

“Many political subdivisions were dependent on the income tax from employees at General Motors and suppliers that are now shut down,” Shook says. “The floor just disappeared, and they are scrambling for a source of income. It’s had a huge impact on budgets, cutbacks in services, payrolls and employee benefits. We’re very fortunate.”