American City & County surveyed readers to determine whether employee benefits have been affected by the changing economic conditions in the country.

American City & County surveyed readers last month to determine whether employee benefits have been affected by the changing economic conditions in the country. Although more than half (54 percent) of the survey’s 368 respondents reported that their departments’ budgets have decreased in the past 12 months, and slightly more (58 percent) expect further decreases in the next 12 months, the majority of survey respondents (79 percent) reported that their departments have not cut employee benefits recently and do not expect benefit cuts in the near future.

Of those who have seen employee benefit cuts (21 percent), just more than half report those cuts appear as increased employee cost for benefits, and nearly one-quarter reduced the coverage provided to employees. Respondents who have seen benefit cuts expect more cuts in the future.

How has your department’s budget changed in the past 12 months? 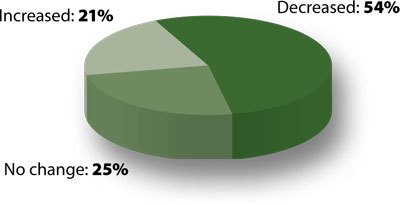 How do you expect your department’s budget to change in the next 12 months? 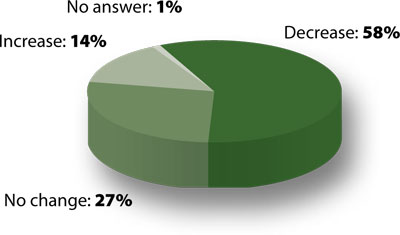 Has your department cut benefits for employees in the past 12 months?

What benefits have been cut?

Have the cuts in benefits: