Looking for a way to cut emissions? Start with city hall. 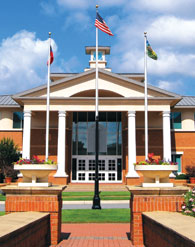 With the passage of the American Recovery and Reinvestment Act (ARRA) of 2009, billions of dollars have been allocated to improve the energy efficiency of residential, commercial and governmental facilities and operations. States and local governments have new opportunities to obtain funding for energy audits, building retrofits and renewable energy projects.

An energy audit measures a building’s total energy use to identify areas for efficiency improvements. Audits look at all aspects of a building and its energy consumption — including HVAC, mechanical, lighting and building automation systems — and produce a detailed and comprehensive picture of its operating efficiency.

Audits include several steps, such as:

By evaluating a building’s consumption and performance levels, an audit can reveal where energy is being wasted or over-consumed so government officials can make changes.

How Do Performance Contracts Work?

As part of a performance contract, the government agency receives an estimated energy and operating cost savings from the facility upgrade from an energy services company (ESCO), which conducts an energy audit to identify areas where energy consumption and expenses can be reduced. Those savings are calculated over a specific period of time to show how the improvements will pay for the upgrade’s cost. The project work is geared toward increasing comfort and energy efficiency while lowering energy costs. Projects also can help decrease consumption, emissions and reliance on traditional energy sources. Because an ESCO guarantees the savings, there is no risk to the government agency.

Adding stimulus money to a performance contract can help organizations pursue conservation measures with longer paybacks, such as renewable energy technology. The Department of Energy specifically recommends leveraging stimulus dollars through proven financing vehicles, and the guarantee that accompanies a performance contract promotes ARRA priorities of accountability and transparency. A performance contract also counters concerns regarding excess spending because projects that pay for themselves in a definitive time period will not burden governments with excessive debt obligations after stimulus funds are gone.

Buildings account for nearly 40 percent of all energy and 70 percent of electricity use nationally per year. The quickest route to a lean utility bill is efficient facilities, which can be achieved through energy retrofits, such as lighting, HVAC equipment, mechanical system and building envelope upgrades. Those changes can cut consumption 15 to 25 percent on average. In addition, retrofits can make systems and equipment more reliable while improving indoor air quality and comfort.

Smart thermostats or other load control devices in homes and businesses can cycle equipment like air conditioners on and off for short periods of time when demand for electricity is high. That demand response helps stabilize prices, reduce the need for additional power plants and avoid disruptive brownouts and blackouts. Cities and counties that do not operate their own utilities should see if their local power provider has a demand response program, because participation often includes a rate break or other financial incentive.

Many municipalities are moving from one-off improvements to developing cohesive, long-term strategies focused on creating better places to live and work, and boosting the bottom line. Renewable energy, facility retrofits and demand response are viable elements and can be augmented by activities such as ongoing service and maintenance, greenhouse gas measurement and monetization, and energy awareness and communication programs. Combined sustainability efforts can continuously improve efficiency, cut emissions and maximize savings.

Renewable technology like biomass gasifiers, wind turbines and solar panels can help reduce environmental impact and hedge against energy inflation. It also can help meet commitments tied to initiatives like the U.S. Council of Mayors Climate Protection Agreement. Cities and counties must consider a number of location-specific variables — fuel availability, utility rates, rebates and tax incentives — to ensure the technology will deliver a significant return on investment.

Dayton, Ohio, is using energy-efficient upgrades and facility improvements to reduce emissions and meet its sustainability goals. The work is part of an energy conservation and building modernization program with Honeywell that is reducing utility expenses and greenhouse gas emissions at the targeted facilities by more than 30 percent.

The program helps the city meet goals outlined in its recently adopted Sustainable Practices Policy, which promotes a cleaner, healthier environment. The policy also helps the city meet its commitments adopted as part of the U.S. Conference of Mayors Climate Protection Agreement. City officials hope the upgrades will earn the Energy Star seal of approval for city hall, which would demonstrate that it meets EPA and Department of Energy standards, and that it uses less energy, is less expensive to operate and emits fewer greenhouse gases than its peers.

A solar project is helping Hillsboro, Ore., cut its energy costs and greenhouse gas emissions. The city has installed ground-mounted solar panels next to the Hillsboro Evergreen Reservoir water storage facility to generate more than 104,000 kilowatt-hours of electricity annually — nearly 20 percent of the power needed for the 15 million-gallon Evergreen Reservoir.

As part of the project’s 20-year power purchase agreement, Honeywell installed the technology and sells the electricity the panels produce back to the city for use at the reservoir. Renewable NRG in Portland, Ore., mounted the solar panels, and SolarWorld Group’s new fabrication plant in Hillsboro supplied the panels and installation hardware.

By using solar energy, the city is cutting carbon dioxide emissions by an estimated 3.6 million pounds over the 20-year agreement — the equivalent to removing more than 295 cars from the road for a year, according to EPA figures.

In 2004, Tallahassee, Fla., launched an initiative to improve lighting, automation and HVAC equipment, as well as water conservation in 45 facilities. Part of a 12-year, $4.5 million performance contract, the work saved the city more than $780,000 in the first year.

In 2008, the city began installing a smart metering network system to automatically collect electricity, natural gas and water usage data from residents and businesses. The system, which covers more than 220,000 electric, gas and water meters, will help the city improve customer service and reduce its operating costs by an estimated $21 million over 15 years.

As part of the program, more than 110,000 electric meters were replaced with smart meters, and retrofitted more than 25,000 gas meters and 85,000 water meters. The meters include digital registers and wireless technology that send readings to more than 300 “collector” meters throughout the city. The collectors feed into the city’s utility systems, generating accurate usage and billing information. The new infrastructure will help the city implement demand response programs and other conservation strategies in the future.