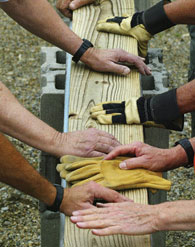 Although the American Recovery and Reinvestment Act (ARRA) — otherwise known as the stimulus package — is showering billions of dollars on local and state governments, only $88 billion is dedicated to repairing or replacing major portions of the nation’s deteriorating infrastructure. Just how far will those funds go, especially considering the American Society of Civil Engineers estimates that $2.2 trillion is needed?

For example, in Michigan only $840 million of ARRA funds are available for transportation projects, while officials estimate the state’s total need at about $5 billion. Also, ARRA provides only 10 to 15 percent of the estimated cost to update many water systems.

Public-private partnerships (PPPs) could help compensate for the shortfall between the ARRA’s funds and the amount necessary to fix the infrastructure problems in both the short and long term. In the near term, the shortfall forces a closer examination of the available private sector financing options. The private capital available for infrastructure projects is estimated at $450 billion, more than five times that available in the ARRA.

In addition, several retirement funds for public employees — many with substantial assets — now are shifting their strategies to include investment in public infrastructure because the risk is almost non-existent, which outweighs the lower return. Using the funds available through private sector financing would be valuable in leveraging the existing public funds.

Combining PPPs and the ARRA to successfully meet a greater portion of the total need depends on a few factors. For example, the ARRA specifies that funds must be dedicated (i.e. contracts signed) shortly after the funding becomes available. While the deadlines can be 120 days or 180 days (or other variations, depending on the sector being financed), it is almost impossible to develop a PPP in that amount of time. Generally, six months to a year is required to negotiate a PPP contract because of the complexity of the contractual arrangements.

Despite the fact that the ARRA funding timeline is not sufficient to start a PPP from scratch, the Texas Department of Transportation (TXDOT) found another way to meet the demands of ARRA and create a PPP. Since late 2008, TXDOT had been developing a partnership under its Cooperative Development Agreements (CDAs), for constructing 13 miles of I-820 and the Airport Freeway in the Dallas-Ft. Worth area. Known as the North Tarrant Express project, the preliminary contract was awarded in January, with the condition that financing from both the private and public sectors would be finalized by the end of 2009.

Of the $2 billion total project cost, TXDOT initially agreed to provide $600 million. As a result, the project was “shovel ready” except for the final financial arrangement. The stimulus package funding provided the means for completing the financing and accelerating the delivery time of the project. In the first week of March, the Texas Transportation Commission applied $250 million of the state’s $1.2 billion in ARRA allocation to the Tarrant County project, setting it in motion.

Because it is still early in the stimulus package process, it is difficult to know how many other projects might qualify for a “Texas option” — PPPs that are “shovel ready” except for the final financial arrangements. The list of sectors covered by the ARRA is significant, including highways and bridges, transit systems, military infrastructures, water and wastewater, public housing, and improving the energy efficiency of schools and public buildings. To help determine if using private financing is appropriate, government officials should ask if their PPP projects are ready for implementation, except for a portion of the financial agreement.

INFRASTRUCTURE IN THE SPOTLIGHT

The ARRA has another important effect on the use of PPPs: The stimulus package has elevated the awareness of the infrastructure challenges facing every level of government. Local stories of exploding steam mains in New York or collapsing bridges in Minneapolis have generated national attention. In the past, the public has viewed infrastructure issues as someone else’s problem, but the debate leading up the passage of the ARRA took the discussion to a new level.

Organizations, such as the U.S. Conference of Mayors and the National Governors Association, provided more evidence of the infrastructure problems by compiling lists of projects that could use the supplemental funding. The lists themselves became media stories, adding to the public awareness of problems with bridges, water and wastewater systems, and the energy efficiency of public buildings and schools. The next stage of the public’s awareness will be the fact that the stimulus package is not sufficient to fix the infrastructure deficiencies.

Increasingly, PPPs are being used to stretch resources. Some states, like California and Alabama, recently passed statutes to allow local and state governments to use the private sector to develop transportation projects, schools, courthouses and other public facilities. Additional pressure for the use of partnerships is now coming from public employee retirement plans, which are investing in infrastructure, dedicating portions of financial holdings to a wide range of projects.

Equally important are a few provisions tucked into the ARRA. For example, Private Activity Bonds (PABs) issued in 2009 and 2010 have been exempted from the Alternative Minimum Tax (AMT), making PABs fully tax-exempt. The bonds, which must be authorized by a public entity, are private debt for the development of a specified project and, therefore, are attractive because they do not affect the public agency’s debt load. In addition, $200 million in supplemental funding has been added to the Transportation Infrastructure Finance and Innovation Act program, which will help make many transportation projects financially viable by providing mezzanine financing (a hybrid of debt and equity financing) for a specific project.

There are several indications that interest in public-private partnerships is increasing. PPP consultants are reporting an increase in the number of local and state government agencies that have been contacting them for guidance in developing partnerships. Project developers and contractors report a similar increase in activity, and financial firms are reporting an uptick in closing deals.

The ARRA can be described as both a crisis and a blessing for PPPs — a crisis because of the realization that the money is not enough to meet the problems, and a blessing because political leaders, civil servants and the general public are aware of the magnitude of the infrastructure problem. And, perhaps, because of that awareness, more public-private partnerships will be established.

Richard Norment is executive director of the National Council for Public-Private Partnerships in Arlington, Va.

The National Council for Public-Private Partnerships and the Federal Transit Administration are hosting a series of regional workshops this year about how public-private partnerships can be used to support transit operations. The events will include discussion about the implications of the stimulus package for transit. For more information, and to register for the May event in Chicago, the July event in San Diego or the September event in Boston, visit www.ncppp.org.