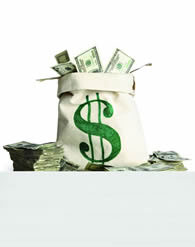 When President-elect Obama promised to create millions of jobs “by making the single largest new investment in our national infrastructure since the creation of the federal highway system in the 1950s,” a delegation of mayors had a few ideas about where to spend the money — more than 4,600 shovel-ready projects, to be more specific.

Bags of money do not arrive on local government doorsteps every day, but financing experts caution that, while federal funding may be welcome, it is not likely to arrive without strings attached. “What we’ve seen historically is that it’s not a free checkbook,” says Denise Beauchamp of Superior, Colo.-based Key Government Finance.

In most cases, local governments are required to match federal dollars, or use federal money only for very specific purposes. For instance, federal funds may not be eligible for equipment purchases, which may be needed to complete the infrastructure projects.

Even local projects that are largely federally funded likely will require local governments to come up with significant money for items or services that are not included in the federal grant or for required matching funds, according to Dennis Brown, vice president for State Government Relations at the Washington-based Equipment Leasing & Finance Association (ELFA). He notes that if federal monies do become available for local government projects, there is almost always not enough to complete the project or extraneous parts of the project that cannot be covered by the federal government.

Also, because loan money is scarce, city and county governments could face difficulties acquiring those matching dollars to make the federal program work. First, the lenders’ traditional incentive for tax-exempt government loans has diminished in the current economy. Because lenders do not pay taxes on the income they earn by loaning to municipalities, they often can offer such customers highly competitive interest rates. “[However,] a tax benefit is only good if you have profits you want to shelter,” Beauchamp says. “As profit margins decline among financial companies, their appetite for tax-exempt debt disappears.”

As a result, the marketplace for government financing has shrunk significantly. Some players in the industry have withdrawn from the government finance space altogether, and some others are avoiding new deals with a “wait-and-see” attitude. “There are too few dollars chasing too many deals,” Beauchamp adds. And, if the current liquidity crisis continues well into 2009, more lenders are unlikely to flood the municipal financing space anytime soon.

When local governments find lenders that are still in the game, antiquated regulations keep them from borrowing large sums at highly competitive rates. Based on a 1986 regulation, when certain entities — such as city or county governments — borrow more than $10 million in a calendar year, their debt is considered non-bank-qualified. While banks have no legal restraints for the number of bank-qualified (BQ) loans they offer (provided to borrowers with less than $10 million in debt per year), lenders are limited in the amount of non-bank-qualified debt they can carry to 2 percent of their capital. Because the $10 million limit has never been adjusted for inflation, almost any infrastructure project makes it a non-bank-qualified borrower. And, because the limit is per-year rather than per-transaction, any debt a municipality issues, including municipal bonds, contributes toward the $10 million.

“If they build anything with bricks and mortar, it’s over $10 million; any highway is over $10 million,” Brown says. “Some finance sources are in a situation where they have a bucket for bank-qualified loans; the BQ bucket never fills up, and the non-BQ bucket stays full.”

With fewer lenders available to municipal governments and outdated regulations limiting the number of loans active lenders can carry, cities and counties that need to match federal funds may be looking for new options this year. Municipal lease-purchase financing can be one method of stretching the federal dollars to move projects forward. “Under current laws, if [local governments] get all this money, it’s still not going to cover the projects they need to complete,” Brown says. “If [a city receives] an annual sum of $5 million and its infrastructure needs are $40 million, it can try to spread out that $5 million and leverage it into a $40 million lease for 10 years,” he says.

Beauchamp says that government officials sometimes misunderstand the leasing option, especially if they confuse government leasing with commercial or consumer leasing. Unlike commercial leasing, municipal leasing always results in a purchase. “You make your final payment, and the asset is yours,” Beauchamp says.

ELFA points out that there is not a lot of difference between straight lending and municipal lease-purchase. It amortizes just like a loan, but, because lease agreements are not restricted by the same limits as traditional loans, they offer a more readily available form of financing for government infrastructure projects and equipment.

Aside from considering lease-purchase agreements, municipal governments also should understand their bank-qualified status. ELFA suggests that if a small municipality that is a traditional BQ borrower is having trouble finding someone to buy their debt, they should be marketing themselves to a state-chartered bank, small bank or independent bank. That is because smaller banks, which do not have their own holding companies (or “non-banks”) to handle non-BQ loans, can only carry BQ debt — and there is no limit to how much they can carry. Because lenders have more capacity to offer BQ financing, they can often offer better interest rates.

For those municipalities that borrow more than $10 million in a year, industry professionals recommend lobbying politicians to change the limit for BQ financing. The 1986 statute is “cutting out a lot of small banks [from providing financing] and small communities [from obtaining financing],” Brown says. “If it was changed to $10 million per transaction, it would open up the markets a whole lot.”

Other proposals advocate tagging the limit to inflation. Regardless of how the change is determined, most in the industry agree that a change to the BQ limit would help both lenders and borrowers. “[If the limits remain consistent,] what ultimately happens is that banks have a continually shrinking market each year as prices for projects go up,” Brown says. “Local government leaders who want to make a difference ought to be at Congress’ doorstep saying, ‘$10 million doesn’t go as far as it used to.'”

With a new president elected on a promise of change, now might be a good time for the request increasing the $10 million limit, Brown says. “That would be a lasting change and would make a difference,” he says. “It would help small communities get access to funding from a lot more sources.”